Justin Williams puts the Kings ahead with a disputed goal in the third, but Anze Kopitar makes it count with two more.

For the second year in a row, the Los Angeles Kings and the San Jose Sharks will play a Game 7. Remarkable.

It's hard to believe that the first period ended up being the second-most exciting of the game, because it was a fantastic way to start. Remember when we could just ignore the first period because it would always end 0-0? For the sixth straight game, a goal was scored inside ten minutes; this time, Justin Williams put the Kings up 5:39 in. The Kings put together a perfect breakout and zone entry to do it, too. After the Sharks dumped the puck in, Drew Doughty got the puck behind the net. He went to Williams, who passed ahead to Muzzin, who fed right to Doughty. Doughty entered the zone, hesitated, and made a perfect pass across to Williams. The pass got through before Alex Stalock could react and knock it away, and with Joe Pavelski just a split-second late on the backcheck, Williams converted.

Andrew Desjardins and Kyle Clifford dropped the gloves 32 seconds later, and we were off. The Kings got the better of the first period in terms of scoring chances, but the pace was frenetic and both goalies were sharp. Stalock was a slightly surprising choice in net, but he acquitted himself well early on, stopping Mike Richards on a 2-on-1 and making eleven stops. Jonathan Quick made eleven saves of his own, and got some help when Drew Doughty dove in front of a Pavelski slapshot. There was also one more incident; we gave you three angles to evaluate Joe Thornton's kneeing penalty earlier, so we won't bother going on about it too much here.

Dustin Brown would be okay after taking that knee to his knee, but the Kings did not escape this game unscathed. In the second period, Robyn Regehr took an interference penalty and Jarret Stoll took a high-sticking penalty to put the Kings on a 5-on-3 for 1:37. Out came Doughty, Willie Mitchell, and Anze Kopitar. Those three defended heroically and limited the Sharks to two shots on the two-man advantage, but Mitchell appeared to injure his leg (or groin?) near the end of his shift.

No word on the Game 7 availability of Mitchell, who hit the post in the second and once again had a pretty good night in his own end.

The Kings killed a third penalty soon after; 32 seconds later, however, San Jose equalized. It was a gnarly multiple deflection, but if you ramp up the pressure and crowd the front, it's not luck. Justin Braun took the long slapshot, James Sheppard got his stick on it, and the skate of Regehr (OF COURSE) provided the final redirection. The remainder of the period was scoreless, setting the stage for the third period.

The referees had us fooled. For a few minutes, we thought the really controversial call was going to be that unsportsmanlike conduct on Tanner Pearson. Pearson was whistled for unsportsmanlike conduct for... get this... a snow shower. Yep, he sped in to try and get to a loose puck before Stalock, then stopped short when Stalock beat him to it. The penalty call was met with derision from the home fans, and the referees sent Dan Boyle to the box on a tacky interference call 32 seconds later to make it all go away. By the way, I'm not sure why the number 32 keeps coming up... maybe Jonathan Quick was destined to have a good night?

A few tense minutes ensued. Jeff Carter made a brutal turnover which was, thankfully, unpunished. Patrick Marleau fell on Jonathan Quick, resulting in shoving. Finally, at 11:56 of the third, the pivotal moment. Kopitar and Williams get the cycle going as they've done so many times this year, and Robyn Regehr gets the point shot. Williams tips the puck in front, and the puck squirms through Stalock, coming to rest just behind/underneath his left skate. Williams poked at Stalock, Stalock slid backwards, and Matt Irwin (in for the injured Marc-Edouard Vlasic) couldn't keep the puck out. The video and explanation is here.

The goal, obviously, is a controversial one. Let's be clear: there was no intent to blow, as the whistle was never blown; referee Chris Lee behind the net, and he most likely saw the puck not controlled and allowed the play to continue. (This assumption can be backed by Stalock, who looked behind him after the inital shot and later said, "it was just lying behind my skates.") So that's not where the controversy lies. Where it does lie is in the part that's non-reviewable: Williams pushing Stalock, and the puck going in. It wasn't a traditional "player-pushes-pad" goal in that the puck went in separately from the pad, but that puck doesn't go in without the Williams push. The referees cannot overturn a goal on replay because the goalie was pushed, even if Rule 69.3 or 69.6 was violated. So the goal stood.

You'll hear all about that tomorrow, but this doesn't change the fact that the Kings took over after that goal. More specifically, Anze Kopitar took over, scoring twice in the next three minutes to put the game away. First, there was that Williams guy again, tipping Dwight King's shot and forcing Stalock to kick the puck out... to Kopitar, who nonchalantly whacked it in an inch off the ice. Kopitar then made it 4-1 on the power play, scoring on another tip-rebound from an Alec Martinez shot and Doughty tip. This set up a lawless final few minutes, which I'll recap by showing you a screenshot. 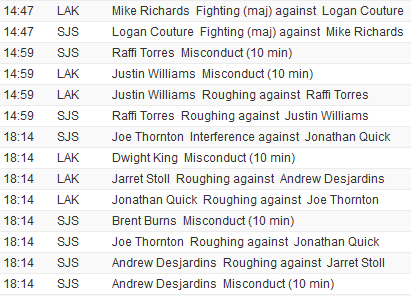 The Kings were down 3-0, and down and out. They've won three straight in emphatic fashion. But after all of this... the Kings and Sharks still have to play Game 7 on Wednesday. Get ready.