The Ducks take advantage of brutal defensive-zone play and hold off LA's desperate late charge to earn a 4-3 win.

The bad? The Los Angeles Kings were once again mistake-prone and ineffective on the defensive end last night, and it cost them Game 5. After their 4-3 win, the Anaheim Ducks are now on the verge of eliminating the Kings and advancing to the Western Conference Finals.

Much has been made of the importance of scoring first in this second round, as across all four series, the team scoring first has only lost once. The Ducks added to the trend after the Kings made a hash of things in their own zone, just seconds after Alec Martinez had cleared a Teemu Selanne shot off the line. Jake Muzzin lost an edge in the corner, and when Daniel Winnik picked up the puck, both Dwight King and Mike Richards went to the corner to pressure Winnik. This left Nick Bonino rather... open. 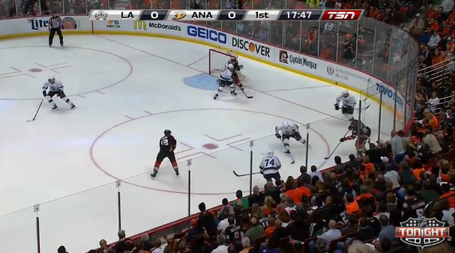 With Drew Doughty and Kyle Palmieri grappling in front, Bonino fired a shot past Jonathan Quick. Just like that, it was 1-0 2:15 into the game. The Kings finally snapped out of it and, aside from a good Corey Perry chance which was foiled by Doughty and Quick, had the majority of the good looks in the next few minutes. John Gibson made a fantastic glove save on Tyler Toffoli to throw all of us into a deeply pessimistic state, but just when it looked like nothing was going to beat him... Trevor Lewis appeared! A sloppy Ducks line change allowed Lewis to break in past Sami Vatanen, and his shot took a slight deflection of Bryan Allen before beating Gibson. A big, big goal, and after a couple more chances for Selanne and for the Pearson-Carter-Toffoli line, the game was tied at the break.

The second period was a good opportunity for LA to tilt the ice, steadily up the pressure, and force a suddenly mortal John Gibson to make some saves. Instead, they kind of threw up all over themselves. Nick had Anaheim getting six of the first seven scoring chances of the second period, and they made them count. The power play goal was, at the very least, not the result of a direct mistake, but when Teemu Selanne wheeled around the net, only Jeff Schultz was covering Mathieu Perreault and Devante Smith-Pelly. 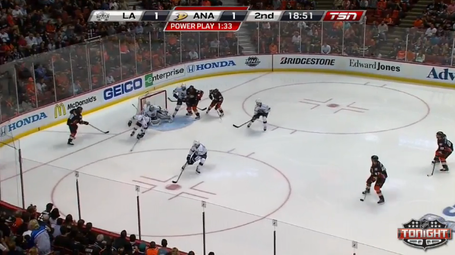 Turns out both of them touched the puck after Selanne's perfect pass, but Smith-Pelly got credit for the goal. Then, the Ducks struck again, and this one was a killer. Alec Martinez cleared his own zone by going towards the boards instead of up the middle; Dustin Brown would later say that his team didn't offer Martinez enough support, but the decision was a terrible one as the puck went right to Ryan Getzlaf. The opportunistic Smith-Pelly darted in ahead of Matt Greene and was there for a breakaway pass. 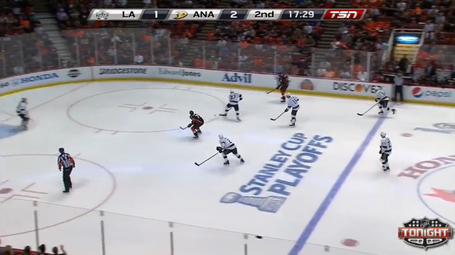 Smith-Pelly made Quick look silly with the deke, and suddenly, it was 3-1. The Kings looked to stem the bleeding and get one back, but when Greene whiffed on Jordan Nolan's attemped outlet, it once again turned the defensive zone into a fire drill. Matt Greene ended up above the circle, Alec Martinez vainly blocked off Saku Koivu, and Jakob Silfverberg was there when Jonathan Quick couldn't deal with a rebound. 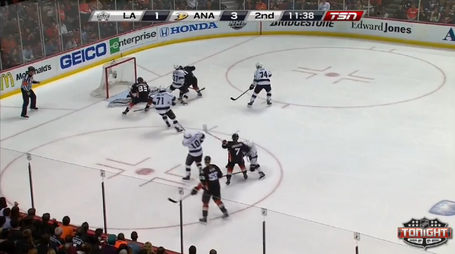 Now up 4-1 at the halfway point, Anaheim was once again content to retreat into a defensive shell and simply run the clock out. They did a better job of it in Game 5 than they did in Game 4, and all I really mean by that is that they actually got some shots on goal this time. It was kind of a maddening game for Quick; you could argue that the game could have been 3-2 or 6-3 without him in net, and you'd be right in both cases. He made a number of difficult saves in tight, but in the second period, those three goals pretty much sealed the deal.

The Kings got a lifeline late in the second when Smith-Pelly high-sticked Doughty and received a four-minute penalty. (Productive game for him; two goals, a double minor, a diving penalty, and a couple more golden chances which he couldn't cash in.) Marian Gaborik got two excellent chances in the first two minutes of the PP and only missed once, as he whirled around and slapped a shot past Gibson. The Kings couldn't score on the second half of the PP, but the deficit was at least surmountable.

Predictably, LA outshot Anaheim 14-2 in the final period as they threw everything they had at the Ducks. It took them fourteen minutes to get a goal, which was tipped in by Gaborik off a backhand attempt from Dustin Brown. (Anze Kopitar had the second assist, his 12th of the playoffs.) That left 5:48 for the Kings to get a game-tying goal, and due to the Ducks' inability to escape their zone, they had a couple bids. But Gibson finished off a 39-save performance, and Anaheim held on to take home Game 5.

It's a similar story; the Kings looked great once they had a big hole to climb out of, but it was much too late to make up for the early troubles in their own end. LA now faces elimination for the fifth time in the 2014 playoffs.