The Kings haven't been so hot against Chicago as of late. Any good signs? Perhaps.

Two weeks ago, we looked at what we might be able to learn from the head-to-head series between the Los Angeles Kings and the Anaheim Ducks. Despite a terrible record in the regular season, the Kings were able to finish off the Ducks in the second round. Let's hope that happens again, because the season series against the Chicago Blackhawks wasn't any better.

With the Kings looking to extend a six-game winning streak, they went into the United Center and... laid an egg. Chicago scored three goals in the first period: one shorthanded, one at even strength, and one on the power play. Notably, the Blackhawks didn't let up despite being down by three; they got 15 shots on Ben Scrivens in both the second and third periods. It was an ugly loss, and the 0% Fenwick Close stands out quite a bit on this here graph: 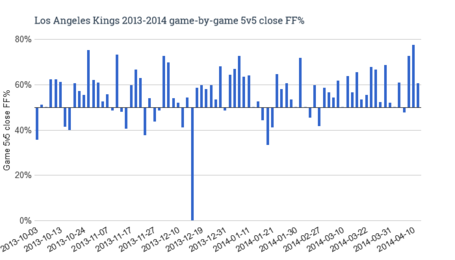 Frustration. Lots of frustration. An early goal by Brandon Saad meant the Kings were chasing for the rest of the game, and after a decent first and second period, they couldn't even threaten to tie the game in the third period. Dustin Brown was stopped on a penalty shot, and Antti Raanta the remaining 25 shots by Los Angeles.

LA actually found some offense in the teams' final matchup of the season, after two weeks with only Anze Kopitar scoring. However, the Blackhawks had more firepower. It was LA's ninth loss in ten games, and they reeled off an eight-game win streak. In the middle of that, Marian Gaborik came to town. It remains to be seen whether he'll help the Kings match the offensive output of Patrick Kane (2G, 1A) and Jonathan Toews and Patrick Sharp (2A apiece).

At least, when it comes to the regular season. Given that only Corey Crawford and Jonathan Quick only played in the final game, and that the backups barely allowed anything during the season, we can't take anything away from the goaltending. The Chicago defense was stingy, LA's was not quite so... a concern, especially since injuries have downgraded their defense. With many blaming LA's inability to keep up with Chicago last year, the ability of Jeff Schultz and Matt Greene to adapt is an important factor. As for the offense, the slumps of LA have faded.

So perhaps the playoffs are a better indicator. In the second round, the Blackhawks essentially played the Wild to a draw in possession, with the Wild having an edge overall. However, Chicago won the first two games easily by taking advantage of their scoring chances, while winning the last two by 2-1 margins. Corey Crawford is playing better than Jonathan Quick, while LA has been scoring more.

We'll wrap things up with a quick look at the possession statistics this season.

Though the possession figures improved over the course of the season series, the Kings always came out on the short end in PDO. Blame the offense in those first two games, and the defense in the third. The totals aren't particularly revealing given the context, though. The first two games were part of a long stretch of ineffective play by the Kings, during which they excelled solely because of Ben Scrivens and Martin Jones. The third was actually the first effective offensive game after a pronounced goal drought, but Jonathan Quick and the Kings couldn't stop Chicago. The picture gets worse when we look at close-game situations...

(all statistics courtesy of Extra Skater)

LA barely had any time at 5v5 close in that first game, but they were much better in the second game, though 5v5 close did not account for the third periods struggles. The third game was basically even at 5v5 close, except that the Blackhawks scored twice and the Kings only scored once.

Given how even last year's series ended up being in terms of possession metrics, and given that the two teams were the league's best in Corsi and Fenwick this season, it's not news to say that this could be a very tight series. Much like last round, however, the 2013-14 head-to-head record makes the outlook seem a bit uglier. We know that LA is capable of playing with Chicago; now it's time for them to prove that they can beat Chicago.