The Kings are Trusting Jake Muzzin, and it's Working

Share All sharing options for: The Kings are Trusting Jake Muzzin, and it's Working

Jake Muzzin had an excellent 2012-13 regular season. Deployed in favorable minutes, but not incredibly sheltered ones, Muzzin made the most of his opportunities and led all defensemen in raw Corsi. That doesn't mean Muzzin was the best defenseman in the league; his somewhat favorable minutes and excellent teammates had a lot to do with that result. Still, it was a fantastic first year.

Come the playoffs, however, the Kings lost faith in Muzzin. Suddenly they did not trust him with anything but incredibly sheltered minutes. Take a look at the usage chart (from Extra Skater): 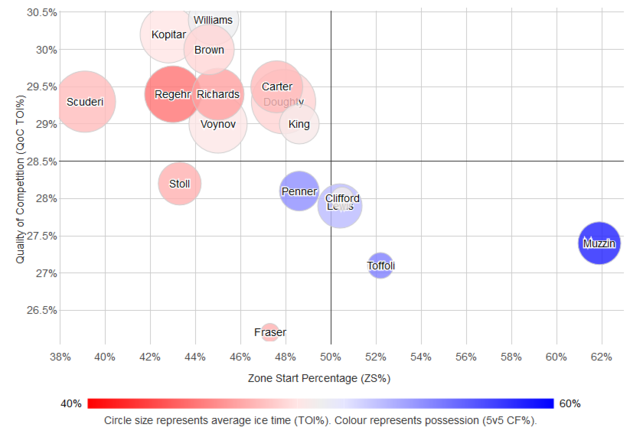 I don't know if the Kings thought Muzzin was too inexperienced for tough playoff minutes or if a low playoff PDO (97.6) led to this deployment. The result was extreme - as is obvious on the chart, his minutes were far more sheltered than any other Kings defenseman. Muzzin did just fine in those minutes, leading the team in Corsi. But deploying him in that way made every other defenseman's job harder, which probably hurt the team.

In 2013-14 the Kings reverted to a more standard deployment for Muzzin. As Nick wrote a couple days back, the defenseman posted another excellent season, comparable in quality to far more heralded players. This time, when the playoffs arrived, Muzzin maintained his regular season role. The 2013-14 playoffs usage chart: 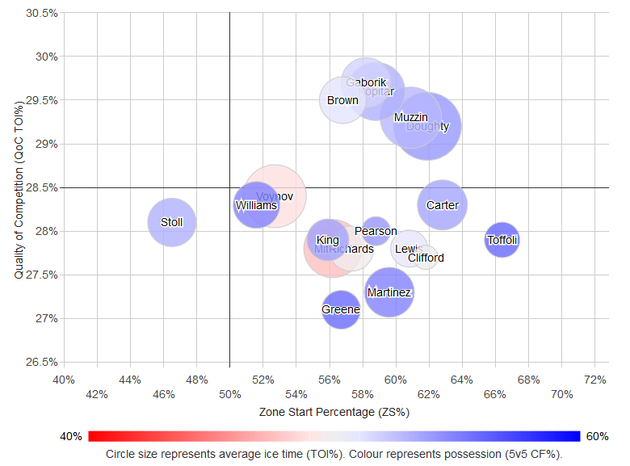 Muzzin's raw zone start % is basically the same in the 2012-13 and 2013-14 playoffs (61.9% and 60.9%, respectively). The Kings' possession results have greatly improved in this years' playoffs, and the team has had way more offensive zone starts. Everyone's zone start % goes way up, so raw zone start % becomes misleading. Muzzin's zone start % relative has dropped from 21.2% to 6.0%, which accurately tells the story of his new deployment.

I can't say for sure why the Kings are trusting Muzzin more - perhaps they are starting to recognize Muzzin's talent, or perhaps injuries to defensive defenseman forced them to give Muzzin tougher minutes. Either way, the Kings have benefitted. The new deployment makes things a little bit easier for every other defensemen, and Muzzin is flourishing under his new responsibilities. It is one major reason why the playoffs are going quite a bit better for the Kings this time around.