What matchups have worked for LA in the Western Conference Finals?

What's worked for LA this year as compared to last and what is the key to Game 6?

Share All sharing options for: What matchups have worked for LA in the Western Conference Finals?

Through the first 5 games of the Western Conference Final we have seen much of what we've expected. Toews and Kopitar have been locking horns night after night. It's a matchup that both coaches have been comfortable with as they've seen similar amounts of time against one another in both arenas. 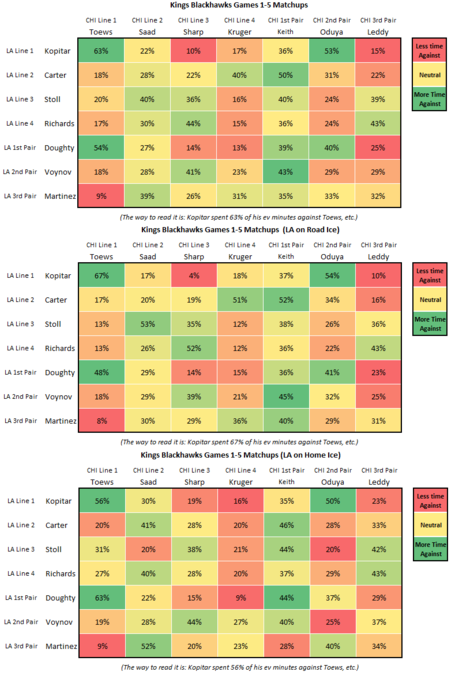 And as was the trend a season ago, Toews has dominated possession.

Despite that, the Kings are winning the series 3-2. What's been the difference?

The answer is depth. The Kings are a much, much deeper team this year. The Marian Gaborik trade, the presence of  Tanner Pearson, a larger role for Tyler Toffoli and moving Carter to center have given the Kings a huge boost to their forward depth.

A season ago when Kopitar had been kept busy trying to neutralize Toews, the Kings lacked production from any of their other lines to make up for it. This year, the ascension of the Pearson-Carter-Toffoli line has carried them over the top.

Interestingly, they've been able to do most of their damage when on ice against the likes of Patrick Sharp and Duncan Keith. Quenneville has kept his shutdown line centered by Marcus Kruger on them when he can, while in LA Sutter has trusted them with time against the Blackhawks 2nd and 3rd lines. Carter has posted a +18 Corsi rating against Sharp (who has been mainly centered by Michal Handzus) so far this series.

The Kings' third line, however has been their Achilles heel. In Chicago, Quenneville has sought to get the Saad-Shaw-Kane line against them and they have chewed the Stoll line up. In Los Angeles, Sutter has kept them away from that and kept them mostly against Handzus and Sharp. They've done much better with this matchup which is a  good sign for LA in Game 6.

So the question is, who should the Kings use to matchup against the Blackhawks' 2nd line? In the last two games in LA, Sutter used an equal dose of both Carter and Richards against them. We'll likely see that again in Game 6. But the key will be the Pearson-Carter-Toffoli line, which incidentally consists of two rookies who didn't start the season with the team.

Will they be able to neutralize Saad-Shaw-Kane while also getting chances against the Handzus line when they can? We'll have an answer soon enough, but the truly fascinating thing is that so much of the Kings' fate rests on the shoulders of two guys who were born in 1992.