Kings-Ducks Playoff Preview: Five Kings to Watch in Round 2

We all know about how effective Anze Kopitar, Jonathan Quick, and Drew Doughty were in the #reversesweep. However, this series will hinge on the supporting cast. Here are five players who could be major factors in the second round.

Share All sharing options for: Kings-Ducks Playoff Preview: Five Kings to Watch in Round 2

With the Los Angeles Kings kicking off Round 1 today, I took a look at five players who could play a key role in Round 2. I tried to focus on players who weren't heavily discussed in the aftermath of the Kings'  Round 1 victory. (Note: I asked for input on Twitter on this question and all of the below were brought up as important factors. Mike Richards, Dustin Brown, Tyler Toffoli, and Robyn Regehr were also suggested as key players, but I figured they've been talked about enough. Each of them will certainly play an major role in Round 2.)

It's difficult to talk about Tanner Pearson without first talking about his more heralded rookie teammate, Tyler Toffoli. Toffoli was cited by many as an X-factor against the Sharks, but Pearson was barely mentioned at all in the build-up to Round 1. Of course, it didn't help that he watched Games 1 and 2 from the bench. Once he came into the lineup, though, Pearson provided an immediate jump-start. Pearson didn't find the net until his empty-netter in Game 7, but he provided two direct assists for Tyler Toffoli and put eight shots on net in Games 5-7. He could be an impact player on offense, especially assuming he stays with Toffoli. But the playoffs are a real test for young players, and Pearson can't afford to struggle too much against Anaheim.

Wait, how did Jeff Carter end up being under the radar? He picked up six points in seven games! However, most of those points weren't very noticeable ones. For example, his two goals were a go-ahead goal in Game 3 which was overshadowed by the Sharks' OT victory, and an insurance goal in Game 5 which banked off Brad Stuart's skate. And see if you can remember any of his four assists; two were early in the series, and two were of the "well, he was one of the last two guys to touch the puck" variety. Carter was pointed out as one of the weaker Kings in Games 5-7, and he averaged only two shots per game through the series. Granted, Pearson and Toffoli excelled, and maybe that was because Carter ceded the more offensive role on that line combination. But if the Kings end up searching for goals, here's the guy who has to step up.

Speaking of under the radar, I'm not sure anyone had a quieter series than Dwight King. King only had one point, tied with Kyle Clifford and Mike Richards. A fun note, though: aside from the heavily sheltered and lesser-used Tyler Toffoli and Kyle Clifford, Dwight King had the best Corsi numbers for any Kings forward! Check out Extra Skater's Round 1 usage chart: 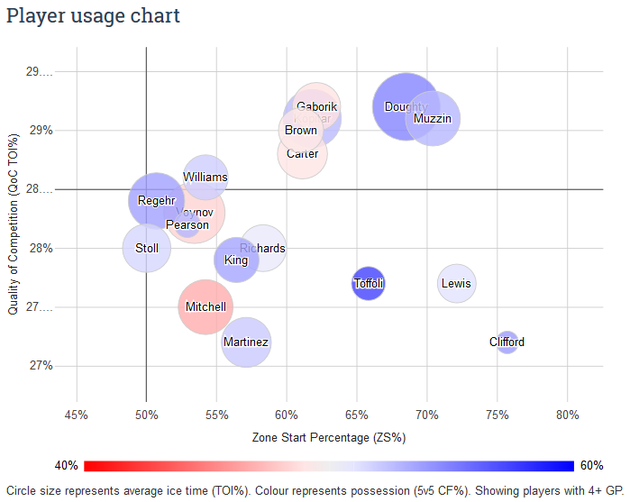 King didn't have to face the toughest competition, but the third line generally started in their own zone more often than any other. King found himself playing what we call low-event hockey quite a bit this season (not many shots or goals for either side when on the ice), and that has continued. He has shown a knack for scoring important playoff goals, though, so we'll see if he can get some points to go with his good possession numbers.

He's usually paired with Robyn Regehr and he's usually compared to Drew Doughty, so it's easy to overlook Slava Voynov. His most prominent moment in the series, sadly, was when Patrick Marleau's soft backhand in overtime of Game 3 ticked off his stick and over Jonathan Quick's shoulder. Voynov struggled in Game 4 as well, but he bounced back with a really strong effort in Game 5 and was impressive in Game 7. Voynov is getting big minutes (second behind Drew Doughty) and playing in all situations; with Regehr's usage also going up in the absence of Willie Mitchell, Voynov's job gets even tougher against Anaheim. An offensive spark would be nice; stability on the back end would be best.

Matt Greene only played two games in the first round. The first was an unqualified disaster, as he was on the ice for four goals against in a 7-2 Game 2 defeat. The second? Much better! Thrown into the fray as a replacement for the injured Willie Mitchell, Greene played 12:43, was on the ice for one goal FOR (!), and generally didn't screw up. Greene wasn't the most exciting option as an injury replacement, but his availability was ideal heading into a playoff Game 7. With Mitchell's availability unknown for the next round, however, Greene may need to do more than simply not screw up; he may need to thrive.