Jeff Schultz is in for the injured Robyn Regehr, who is Jeff Schultz?

Share All sharing options for: Jeff Schultz is in for the injured Robyn Regehr, who is Jeff Schultz?

The Kings' defense has been thinned out in recent games as both Willie Mitchell and Robyn Regehr have gone down. LA recently called up Jeff Schultz as their 7th defenseman and he will now get the call in what will be his first NHL game since March 31, 2013.

At the age of 28, Schultz already has seven seasons under his belt in the NHL, all of which came with the Washington Capitals. In that time, Schultz has had a pretty strange career. He was originally drafted in the first round in 2004. He broke in with the Caps three years later at age 21 and played in 38 games for coach Glen Hanlon.

Hanlon was replaced by Bruce Boudreau during the following season and Schultz was able to lock down a full-time spot in the lineup. Over that season and the next two, it looked like he had come into his own as a steady, cerebral defensive defenseman who relied on positioning rather than brawn (he never racked up big hit totals despite his 6' 6", 230 pound frame).

This phase of Schultz's career hit it's peak with a strong '09-10 campaign where he posted strong underlying numbers and received a gigantic boost to his plus/minus thanks to a hot run in percentages. In fact, his league leading +50 that season was the best single season plus/minus mark in Caps history. Schultz was rather fortuitously up for a new contract that off-season and received a four year deal at $2.75M per year.

Unfortunately for Schultz and the Caps, his play fell off a cliff over the next three seasons culminating in a buyout in July of 2013.

So what happened? This wasn't just a case of a player riding hot percentages suffering from regression in ensuing seasons. Schultz's puck luck came back down to Earth, but he became a negative possession player as well. The answer likely is that as the Caps became a worse and worse team, Schultz's performance followed suit.

Japer's Rink hypothesized the reasons for this in a great post trying figure out what went wrong with Schultz:

You can clearly see Schultz's stats plummet in 2010-2011, which is right about the time that Boudreau started fiddling with his systems play. Schultz had been playing in pretty much the same system since he turned pro with the Hershey Bears in the 2005-2006 AHL playoffs. Suddenly, in the middle of the 2010-2011 season, he was supposed to do something different when Boudreau shifted the defensive-zone coverage and implemented the trap. And then another different thing when Boudreau tried to implement a "hybrid" system in 2011-2012. And then another when Dale Hunter took over and installed an aggressive man-to-man system. And then another when Hunter realized that the man-to-man wasn't working and installed a more passive system that emphasized shot-blocking. And then another when Oates and Calle Johansson installed a more aggressive "overload" defensive zone system that also emphasized moving the puck quickly north-south, whereas Boudreau's and Hunter's systems did not.

Jeff Schultz doesn't strike me as someone who does anything suddenly. My guess is that all the rapid-fire changes of system took him out of his comfort zone. Instead of being able to "read and react" or "read and anticipate," Schultz now had to "read, think, think some more, and then react." For a player as... ponderous as Schultz, that extra couple of beats spent thinking probably meant the difference between being an effective NHL player and a healthy scratch. He simply doesn't move quickly enough to be able to think on his feet.

So it would seem that 'versatile' is not a word one would use to describe him. He needs to feel comfortable playing in a certain kind of system and it remains to be seen whether the Kings' system would be a fit. The good news is that he should be acclimated with the ins and outs given that the Kings' minor league affiliate plays the exact same system. Obviously, executing within that system in the NHL playoffs is a whole different ball of wax.

Despite his reputation as a plodding, defense-first guy, Schultz's 'with and without you' (or WOWY) numbers suggest that he hasn't dragged down his partners' numbers to any dramatic degree. Schultz has seen most of his time with Mike Green as his defensive partner. Green's numbers without Schultz have been only very marginally better (53.8% with, 54.3% without). 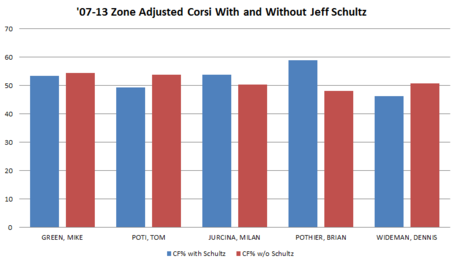 Given that the Kings' defensive system is built around the puck stopper/ puck mover philosophy, Schultz won't have to worry about handling the puck. He'll be relied upon to focus on defense and taking over for Regehr and Mitchell on the penalty kill.

The question then becomes, where will he play? Schultz plays the left side and it is basically out of the question that he'd be paired with another fellow puck-stopper type in Matt Greene. It is most likely he'll take Regehr 's spot with Voynov.

There's also the option putting him on the top pair with Doughty which would pair him with a stronger partner. That may be intriguing given that Voynov has not had a great post-season and his matchups weren't substantially softer than Doughty's in game 1.

Whatever the case may be, this is a big moment for Jeff Schultz's career. His performance in this years playoffs will go a long way in determining whether he'll be able to get a full-time job with an NHL club next season.