How did the Ducks and Kings matchup in the first two games?

The Ducks tried to beat the Kings at their own game in the first two games but came up short.

Share All sharing options for: How did the Ducks and Kings matchup in the first two games?

One of the more intriguing storylines heading into the second round matchup between the Kings and Ducks was Bruce Boudreau squaring off against Darryl Sutter. Both are good coaches who’ve been around the league for a long time, yet have very different personalities and approaches to coaching.

Despite Boudreau’s more affable public persona, he tends to be cagey about his in game strategy. Sutter, who is more guarded and terse, has a "what you see is what you get approach". I.e. his best players are going to play against your best players.

From a matchup perspective, it was hard to get a read on what to expect from the season series. The Ducks lineup was so diffuse over the 5 regular season games that it was virtually impossible to get a read on tendencies.

Coming into the series, Boudreau had a couple options. He could do what Todd McLellan tried in San Jose, namely getting his top line easier minutes and hoping that his 2nd and/or 3 rd line could hold off Anze Kopitar just enough to gain an edge. Or he could just go power vs. power and allow the top lines to throttle each other and rely on his depth scoring to carry the way.

This latter option carried with it a bit more risk given that this is LA’s style, and since their top line is very hard to beat head-to-head, they are very comfortable playing it. Perhaps even more comfortable than usual, considering how the acquisition of Marian Gaborik has greatly bolstered their forward depth. 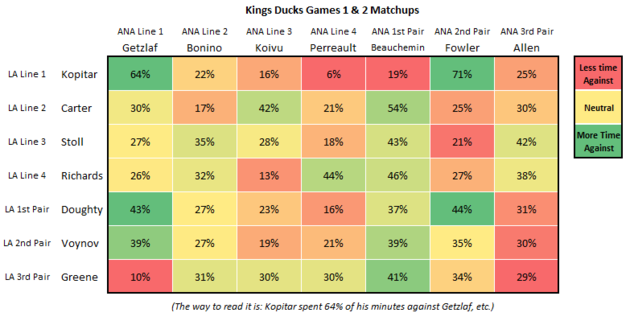 As we can see, Boudreau took the latter. Ryan Getzlaf and Corey Perry had a very successful regular season. Boudreau was betting that they could hold their own against Kopitar, and that his depth lines could carry them over the top given that they helped comprise the highest scoring team in the league this year.

Through two games that well went dry as the Ducks have only been able to convert on 4% of their shots. Perry and Getzlaf have managed 0 goals on 12 shots. And their play in game two lead Boudreau to comment that they were dominated by the Kopitar line.

Boudreau did finally try to adjust late in the third by attempting to get Getzlaf away from Kopitar.

(Getzlaf in blue, Kopitar in green)

As we can see Sutter did not want to let that happen. As Getzlaf and Perry took the ice against the Kings depth lines late in the third, Sutter made sure to get the Kopitar line over the boards as quickly as possible to nullify the effects of the Ducks getting last change. It seemed that he also went so far as to limit Kopitar's minutes so that he could strategically deploy him against Getlzaf.

As the scene shifts to Staples Center, the Kings will get the benefit of having the last change and if Sutter's previous history tells us anything, we’ll see more of the same. One cause for concern for LA is that Anaheim has been able to dictate the pace through the first two games.

While that may have been by design in game two given that LA played switched to a highly conservative style after gaining the lead, they’ll need to get back to playing a strong puck possession game to finish off the Ducks who likely won’t continue shooting 4%.