Kopitar has nineteen points in twelve games, including 14 in the first nine games of the 2014 NHL playoffs. Here's how he did it.

Let's do that now.

Kopitar is in the midst of a twelve game point streak and is the only player in this year's playoffs to have scored in every one of his team's games. How has he picked up these points? We'll start from the end of the regular season, when Kopitar started heating up. (Each link will allow you to admire Kopitar's handiwork on each goal.)

After two scoreless games, Kopitar gets back on the board, and does all the work to do so. He carries the puck for five seconds after a pass is knocked away, eventually deking an overzealous Mike Cammalleri and scoring on a backhand.

The Kings dominated this one, setting the tone early with two goals in the opening ten minutes. Kopitar scored the first one; after exiting the zone and leads Marian Gaborik in, he goes to the net to tap in a feed from Justin Williams. That's a point for movement without the puck.

The second goal was a fortunate one as Gaborik slapped in a shanked Willie Mitchell shot, but Kopitar sets it up with a controlled zone entry, pulls up, and finds an open Mitchell. That's a point for movement with the puck.

Kopitar salvages a point in the season finale. The first is once again set up by Gaborik and Williams, the latter of whom throws the puck behind the net. Kopitar picks it up and doesn't hesitate, tucking a wraparound in before Frederik Andersen can react.

If the first goal showed decisiveness, the second showed pure skill. Ryan Getzlaf fumbled at thin air as Kopitar moved around him and wristed in the game-tying goal. Even Kopitar was amazed: 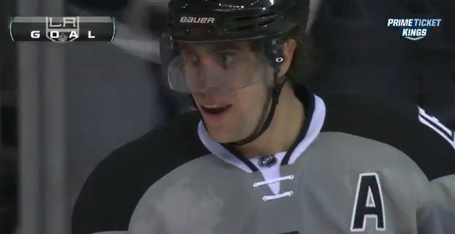 Kopitar gets a futile comeback started, seizing on a Sharks turnover and setting up Jake Muzzin's goal. He uses the exact same pull-up move he did on his assist in the Edmonton game.

It'd be a stretch to say that Kopitar made this goal happen, but hey, he got to a loose puck first to start the play! Things went south very quickly after the first period, though.

For the third straight game, Kopitar got an assist. This one was all Kopitar on the power play: carries the puck from his own zone, moves past Joe Thornton, waits for Jeff Carter to set up in front, and gets a shot through for Carter to tip.

Noticing a trend? Another assist in the first minutes of a period.  This one was again Kopitar setting up in the corner, and this time, he fed Gaborik for a big insurance goal in the first win of the series.

It's teamwork on this one. Dustin Brown had returned to the first line, and he worked a give and go before shooting to the far pad. Kopitar was crashing the net, and as soon as the rebound ended up on his stick he made no mistake. Finally, his first playoff goal of 2014. And not his last...

Up to this point, Kopitar was having an okay playoff campaign. Things took off in the third period of Game 6, as Kopitar had a hand in the three goals which forced a Game 7. First, he and Williams set up a cycle which produced the controversial game-winner. The second goal started with Kopitar blocking a shot in his own zone and ended with him knocking a rebound in a couple inches off the ice. The fun part? Kopitar knows it's coming the whole time. He gets his stick into a shooting position as he crosses the blue line...

... and his stick doesn't touch the ice until the puck hits the back of the net five seconds later. Kopitar would score another goal a minute later, pouncing on a rebound in the crease.

It was the biggest goal of the series, so naturally, it was Kopitar who scored it. Here, watch the GIF and admire. (Kopitar would add an assist on Dustin Brown's empty netter, after picking off a pass in his own zone.)

Kopitar picked up where he left off with three assists in Game 1, and in the first period, he engineered a power play which culminated in an Alec Martinez goal. Kopitar didn't do a whole lot on Gaborik's tying goal despite getting the secondary assist, but the on the winner, he delivered an inch-perfect pass and Gaborik converted with an inch-perfect tip. Even if Brian Hayward didn't see much of Kopitar, the rest of us did.

Kopitar's league-leading 14th point of the playoffs was a quick one, as he waited just long enough to catch Ben Lovejoy flat-footed before passing to Gaborik.

And that is that. 19 points in the last month, 14 in the playoffs, and a whole lot of evidence that Anze Kopitar is really, really good.