The Kings have been lucky and good this postseason.

Share All sharing options for: The Kings have been lucky and good this postseason.

As the players took the ice at Madison Square Garden last night, the raucous New York crowd erupted. It had been 20 years since the last Stanley Cup Final game at the Garden and New York seemed primed for a victory after letting two games in Los Angeles slip through their fingers.

The Rangers got off to a strong start and out-chanced the Kings in the 1st. Yet, with just 0.8 seconds Jeff Carter scored which left the crowd stunned heading into intermission. The Rangers tried desperately to even it up in the 2nd, yet Jonathan Quick stifled them at every turn. The Kings on the other hand seemed destined to score whenever they managed a scoring chance.

That’s been the trend for the Kings this entire postseason. They’ve been running incredibly hot in converting shots into goals. It has been a far cry from the dog days of January where the Kings shot measly 5% and lost 10 out of 15 games.

This bad run occured despite the fact that the Kings consistently out-shot their opponents night after night. Many thought that the Kings offensive philosophy was to blame for the lack of production, and while the system had historically seemed to create fewer chances overall, we argued that LA’s suppressed numbers were largely due to bad luck:

Many have claimed that the Kings are not converting due to too many poor quality shots, yet Gabe Desjardins has shown, shot quality is actually only a tiny sliver of shooting percentage. In other words, just because you get a large number of quality shots does not mean that you will automatically register a higher shooting percentage (or vice versa).

Further, as we’ve shown above, it isn’t even the case that the Kings have been suffering from poor shot quality this season. They are league average in getting shots off from the most dangerous areas of the ice. And despite that, they have only converted shots from the scoring chance area into goals 9% over their last 17 games. League average is 14%.

More than anything the Kings goal scoring woes of late have been caused by extremely bad luck with regard to shooting percentage. And while it is possible that they have a lower than average true shooting percentage based on systemic issues and individual shooting talent, that is 4 to 5 times less important than their league leading shot differential.

Coming back from the Olympic break, the Kings began to shake out of their goal scoring funk. They tweaked their system and began to gain the blue line with possession more often. They also added Marian Gaborik to the mix. These improvements, along with finally getting some bounces caused their shooting percentage to climb: 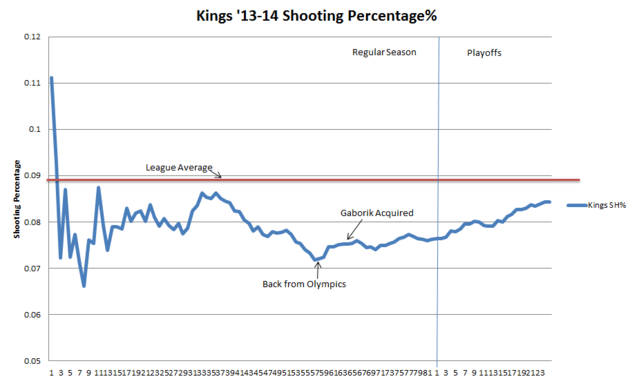 As we can see, their shooting improved steadily and then skyrocketed as soon as the postseason began. In fact, they’ve shot 11.2% in the playoffs, whereas they shot just 7.6% in the regular season. It’s unlikely that either of those numbers are indicative of their true talent, that probably lies somewhere in the middle.

So on Monday night, as the MSG crowd watched Jake Muzzin and Mike Richards stretch the lead to three goals, their mood slowly turned from jubilant to sour. The eerie silence in the arena was broken here and there by frustrated curses hurled at the home team. Boos rained down at the close of the 2nd period.