Hope you all got to bask in the Los Angeles Kings' triumph over the weekend. I don't think anyone was expecting a parade two months ago, and yet, the Kings are taking over downtown Los Angeles one more time today.

Here's a live stream, via Fox Sports West. See below for info on how to see it live or on TV.

Live: If you're actually reading this for information on how to catch the live parade and rally, I'm impressed by your procrastination. But who am I to judge?

The parade will start at 12:00 PM Pacific, at the intersection of 5th and Figueroa. It will run all the way down Figueroa to the Staples Center, 7-8 blocks down. I drove into downtown earlier this morning, and people are already setting up. It's gonna be packed. 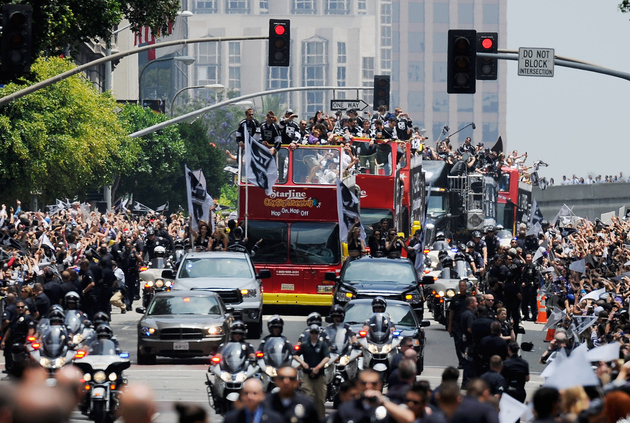 The rally is sold out, but if you manage to get your hands on a ticket, doors to Staples Center open at 11:30 AM. The rally is expected to begin at 1:00 PM, though I think it started closer to 1:15 two years ago.

TV: Fox Sports West (local) and the NHL Network (national) will begin broadcasting the parade at 11:00 AM, and will be showing the rally immediately after as well. Might have to be on a seven-second delay though.

The Kings' full parade info is here. Join us to chat about the parade and the rally below! Nick, Niesy, and myself will be around the festivities, so you can follow along on Twitter as well for live updates.