Through two Stanley Cup victories over three years, the Los Angeles Kings have remarkably been able to keep the core of their team intact. As of now the Kings have 78% of their '14 Stanley Cup winning roster intact heading into the offseason. Those not signed include unrestricted free agents Marian Gaborik, Willie Mitchell, Matt Greene, Jeff Schultz, and restricted free agent Dwight King.

Here is what the Kings cap situation looks like as of now: 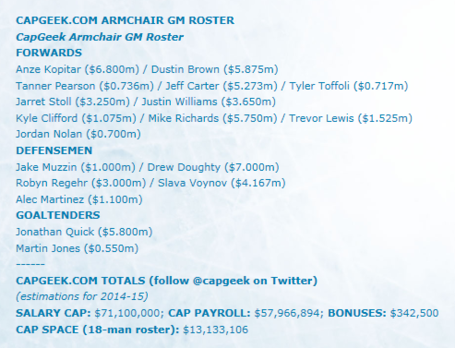 It's easy to imagine that each of the RFAs listed above (King, Vey, and McNabb) will be re-signed and be on the roster next season. If true, that would leave the Kings with two open roster spots.

Additionally, the Kings are currently in negotiations to bring Gaborik back:

Friedman "the word is that the Kings have an offer on the table for Gaborik for 3 years around $5.5-$6 million dollars"

If Gaborik is re-signed

If these negotiations are successful then here is what the Kings cap situation would look like moving forward: 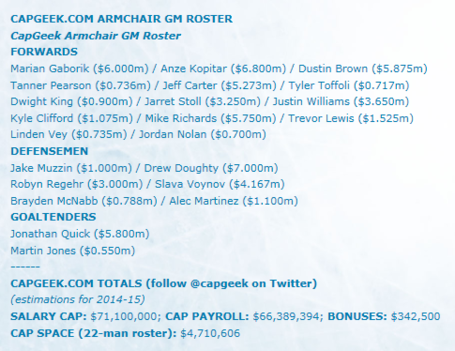 After re-signing Gaborik at $6M, giving King a slight raise, and qualifying offers for McNabb and Vey, that leaves LA with $4.7M in cap space with one open roster spot. The most glaring need would be to bring in another defenseman (or two if they don't feel confident bringing up McNabb next season).

Defensemen Matt Greene and Willie Mitchell are both UFAs so the Kings will need to decide whether they want to go with either next season. It would seem very difficult to bring them both back and fit them under the cap (if Gaborik signs) without significant discounts.

Additionally, this season's UFA defenseman crop seems a little thin and there would be very few upgrades over Mitchell and Greene available at an affordable price. There are only 7 UFA defensemen with a positive Corsi Rel & 62+ games played from '14. It seems likely that Dean Lombardi's preference may be to bring back at least one of Mitchell and Greene over taking his chances in free agency. Mitchell may get the priority due to the fact that he plays the left side and did well in a tougher role than Greene.

If Gaborik is re-signed, we'll probably see a team in '14-15 that looks a lot like the one that just won the Cup.

If Gaborik is not re-signed

If the Kings are unable to bring back Gaborik, then they have a total of ~$10.7M to mess around with, which obviously would open up a world of possibilities. The Kings would head into free agency needing both a forward (preferably one who could play left wing) and a defenseman.

If they see defense as a higher priority, they could use the majority of their cap space on a lefty defenseman such as Andrei Markov and then try to find a deal on an undervalued left wing (Benoit Pouliot?).

Alternatively, if they feel they had the right formula last year and want to replace Gaborik's goal scoring,  then they might spend the majority of their cap space on someone like Thomas Vanek, Mike Cammalleri, or Matt Moulson while bringing back Mitchell at an affordable rate.

There will be a lot more light shed on all of this in the near future as the Gaborik negotiations intensify and we'll bring you news and analysis as stories develop. In the meantime, tell us what you would like to see happen.