Clifford to Toffoli to Martinez. Just how they drew it up.

Share All sharing options for: Anatomy of an Overtime Goal: Game 5, Alec Martinez

Technically, I think a Cup-winning overtime goal has to stand as the most important goal in the Los Angeles Kings' 47 year history. So after a few days of only really saying "HOW COOL WAS THAT?!", let's go ahead and give Alec Martinez's goal the breakdown treatment. Here's how LA went from being stuck in their own zone against the New York Rangers to winning a title in the span of ten seconds.

We start with one of the more overshadowed stories of the playoffs: Matt Greene. Greene is an assistant captain for the Kings, is known as a leader in the locker room, and made nearly $3,000,000 this season. He also played fewer than half of the Kings' regular season games, spent five of the Kings' first six playoff games in the press box, and is about to become an unrestricted free agent. It's an odd situation to be in and likely sets him up to depart the team next season. After all the time he's spent in LA, though, it's kind of cool that his potential last moment in a Kings uniform was this one.

That's Greene in front, breaking up a pass from Derick Brassard. It looks like Tyler Toffoli has the play covered, but loose pucks in front are bad news in overtime. So Greene does the smart thing and tries to flip it out immediately. The Kings' third pairing is out on the ice, so it's Alec Martinez who needs to get to the puck. After it deflects off Mats Zuccarello and takes a weird bounce, he's right there to grab it.

Martinez gets out of the zone quickly thanks to Trevor Lewis blocking Benoit Pouliot. With Zuccarello still a couple steps behind Martinez, the Kings have exactly what every team wants in overtime: an odd-man rush. As you can see below, Martinez gets the puck to Kyle Clifford as the Kings hit the red line, forcing the Rangers' defensemen to be conscious of both sides of the attack.

This play ends up being reminiscent of two past playoff game-winners. The entry looks a bit like the one on Slava Voynov's winning goal in Game 5 of last year's first round; a defenseman jumps up into the rush with two Kings forwards, and a pass right before the play reaches the blue line shifts the defense. On the Voynov goal, Justin Williams slides the puck to Kopitar in the middle, but on this one, it's Clifford going wide to Tyler Toffoli as they reach the blue line.

You wouldn't pick these guys to go on a 3-on-2 if you had your choice of three Kings, but you might think about selecting Tyler Toffoli to take the shot. That's the second reminder: Toffoli set up a Lewis game-winner in Game 2 of last year's second round with a shot off the far pad.

One thing I noticed a lot from the Kings this season, and especially in the Final, was that the team likes to wait for a bit of traffic before taking shots. At worst, the puck gets blocked out of play, and you have an offensive zone faceoff. Dustin Brown springs to mind immediately as a guy who does this all the time, but Toffoli has higher ambitions: he wants to draw a rebound out of Lundqvist. Without stopping his forward momentum; he glides forward, pulls the puck back, and fires.

The Rangers' third pairing is also on the ice. John Moore has the best chance at blocking Tyler Toffoli's shot.  To put it politely, John Moore is not a shot blocker. He averaged less than one blocked shot per game (19 blocks in 21 games) in the playoffs, well behind teammates such as Dan Girardi, Marc Staal, and Ryan McDonagh (67, 53, and 48). It works out for LA, as Moore is only able to get a small piece of Toffoli's low shot. The shot ends up all the way to the far pad of Henrik Lundqvist. It works out perfectly, because even for a goalie as good as Lundqvist, there's not much he can do beyond making the save.

Lundqvist does make the save, but as expected, the puck goes off the far pad. To the credit of Alec Martinez, he's anticipated this, and he is all alone in perfect position to put the rebound away. And that's how this happens: 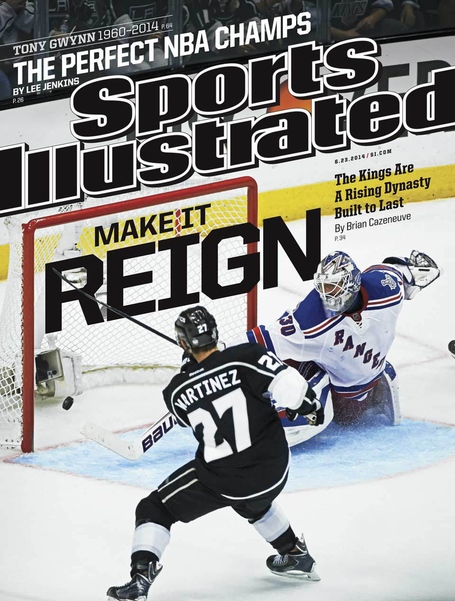