Reports: Willie Mitchell Will Not Be Re-Signed

After four years with the Los Angeles Kings, Willie Mitchell will be wearing another jersey next season.

Share All sharing options for: Reports: Willie Mitchell Will Not Be Re-Signed

When the Los Angeles Kings handed Matt Greene a four-year extension, it was pretty clear that Willie Mitchell's days were numbered in LA. This morning, ESPN the Magazine's Craig Custance appears to have confirmed that the unrestricted free agent will not be a Los Angeles King next season.

Can confirm that Kings won't be re-signing Willie Mitchell: "Unfortunately, no room." Was a huge part of that team.

The 37-year-old Mitchell was obviously not going to be part of LA's long-term plans, but a one-year deal to keep him around wasn't totally out of the question a week ago. However, with Greene receiving a new contract, the defense is crowded. Brayden McNabb would be exposed to waivers if he doesn't make the Kings, and there's zero chance that he clears in that case. So it's safe to assume the Kings already have seven NHL defensemen. As Robert outlined yesterday, here's the Kings' current roster situation... even a lower cap hit for Marian Gaborik can't save Mitchell. 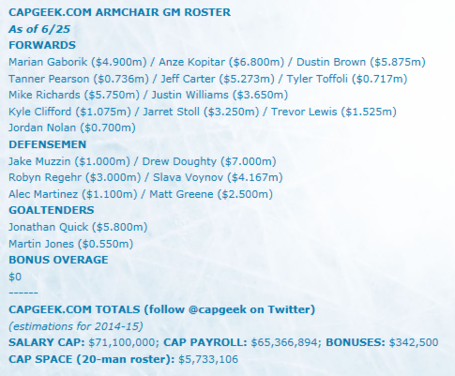 Mitchell was signed by the Kings during the 2010 offseason. He missed the entire 2013 season with knee troubles, but during the other three seasons, he was a valuable member of the Kings' top six and averaged over twenty minutes per game. Mitchell was especially important the 2012 squad; he averaged over 25 minutes per game in the Kings' Stanley Cup run. And of course, he was the second King to lift the Stanley Cup.

This probably isn't the end of Mitchell's career; the Wild have already reached out to him, and other teams looking for a veteran blueliner will likely take a look as well. Good luck to him wherever he ends up.