Stay till the end! (because that's where the Kings are)

Share All sharing options for: 2014 NHL Draft: Day One Thread

UPDATE, 7:05 PM: The Kings have selected LW Adrian Kempe, from Modo of Sweden.

Time for the NHL draft! We'll keep this post updated with the latest news, updates, and... of course... what the Kings do with the 29th overall pick. The Kings' last first round pick was Tanner Pearson at #30 in 2012; their first pick last year was Valentin Zykov, at #37.

Also, John is at the draft in Philadelphia! As he's pointed out, they're already putting a spotlight on the Kings' Stanley Cup...

... so even with 28 picks until the Kings take the podium, it'll be worth watching. There's also intrigue among a number of potential LA targets, as Langluy wrote about here. And that;s not even including the speculation regarding Florida's #1 pick, Vancouver's continued efforts to dump players, mild freaking out over a lower-than-expected salary cap, and the eternal possibility of a stunning trade.

Can't wait for the selections to revealed! Hopefully from behind a curtain. 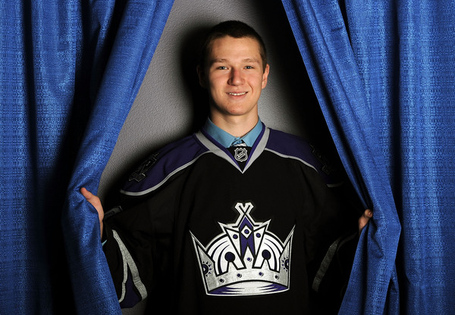 UPDATE, 5:30 PM: Mostly chalk so far, at least where drafting is concerned. Defenseman Aaron Ekblad went #1 to Florida and the four most highly-regarded prospects were drafted with the first four picks, including Calgary's selection of center Sam Bennett at #4. Vancouver took winger Jake Virtanen at #6, Anaheim went with winger Nick Ritchie at #10 and Arizona (the Coyotes, in case you forgot) went with winger Brendan Perlini.

Three of twelve GMs have congratulated the Kings on their Stanley Cup so far.

The biggest news so far? Pittsburgh traded high-scoring scumbag James Neal to the Nashville Predators for noted Kings-killer Patric Hornqvist. We'll let you know if anything else happens.

UPDATE, 6:30 PM: The Sharks and Blackhawks worked Twitter into a frenzy by confirming a trade, but it was picks-for-picks, as the Blackhawks traded up to grab Langluy Target and Hawks fan Nick Schmaltz. Otherwise, not too much to discuss... still primarily forwards coming off the board. Three more Pacific Division picks in the first round, including Vancouver at #24 and San Jose at #26.

UPDATE, 7:05 PM: Center Jared McCann went to Vancouver, and winger Nikolai Goldobin went to San Jose. We speculated on Nikiat Scherbak and Josh Ho-Sang, but they went to Montreal and the Islanders. LA next.