After playing a stifling, shot-blocking system for years under John Tortorella, the New York Rangers have stopped doing that under Alain Vigneault. It's strange to see the Rangers at 22nd in the blocked shots column, but that stylistic change has not hurt them. The Rangers were a very good, defensively oriented possession team last year, and Vigneault's group has posted very similar results. The Rangers have assembled a solid group of defensemen over the years, and it speaks well of them that they have had success under two very different philosophies. Shutting down a Kings offense that's been borderline unstoppable all playoffs will be a tall task. Are they up to it?

First a quick look at the Rangers' usage chart to get some idea how their defense is deployed. McDonagh-Girardi takes the hardest competition and splits the defensive zone starts evenly with Stralman-Staal, freeing up soft minutes for Moore-Klein (or Moore-Del Zotto in the first half of the season). On the chart below the Moore on the bottom right corner is John, on the bottom left Dominic. McDonagh's bubble is mostly obscured by Girardi's, but that's him at top center. Keep in mind that all numbers in this post are regular season only unless otherwise indicated. 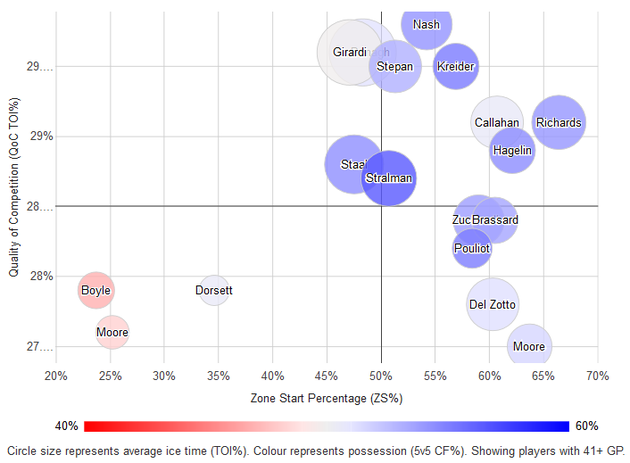 Now, to the pairings. All with-or-without-you (WOWY) data is from stats.hockeyanalysis.com.

This pairing matches up against the opposition's best players. Presumably that means a lot of time against the Kopitar line, which is what the Rangers attempted in both regular season matchups.

For a pairing with a lot of media hype, these results are pedestrian. 50% Corsi in difficult minutes (toughest competition on the Rangers, moderately unfavorable zone starts) isn't terrible. But given that the Rangers are a 52.4% Corsi team, it really isn't exceptional either. This pairing definitely doesn't compare to Doughty-Muzzin, who take on similar minutes with the Kings (albeit with somewhat easier zone starts) and nonetheless see LA's results improve dramatically when they are on the ice.

Ryan McDonagh and Dan Girardi have seen a lot of Crosby and Giroux in the playoffs, as one would expect, and the pairing has struggled at times (McDonagh 47.1% Corsi, Girardi 43.4%, despite receiving somewhat friendlier zone starts in the postseason). I think Kopitar and Gaborik have a good bet at continuing that trend. This matchup should be an advantage for the Kings.

McDonagh's amazing results away from Girardi are striking. This is mostly because when McDonagh is not with Girardi he is with Anton Stralman, who is something of a Corsi god, as we shall see. Girardi doesn't get that Stralman bump, so his WOWYs look much worse. Still, this is some evidence a McDonagh-Stralman is a better idea than McDonagh-Girardi, and the Rangers gave the wrong guy a huge contract.

The best pairing on the Rangers this year. Yes, this pairing gets easier matchups than Girardi-McDonagh does, but the zone starts are about the same. And there's no way the quality of competition difference even comes close to accounting for the huge gap in Corsi%. Stralman-Staal's Corsi numbers are just really impressive. This is a strong point of the Rangers, outclassing the Voynov-Regehr or Voynov-Mitchell second pairing the Kings will ice.

The WOWYs indicate to me that this pairing's results are from Stralman's excellence, not Marc Staal's. I am willing to give Staal some credit for not dragging Stralman's results down. Still, whenever the two are apart, Staal flounders and Stralman continues to flourish. This isn't just because Stralman is with McDonagh when not with Staal, as Stralman posted a 55.2% Corsi in 144 minutes with John Moore. Even in the playoffs Stralman has managed to distinguish himself from his partner, with his 51.0% Corsi surpassing Staal's 49.1% despite the two having mostly played together.

Did I mention Stralman (still only 27!) is set to hit unrestricted free agency after the series? And that the Rangers gave Girardi 6 years and $33 million but only offered Stralman 3 years and $9 million and got rejected? Because these things seem like they're worth mentioning.

Anyway, I imagine this pairing will see a lot of the Carter line. Should be a fun strength-on-strength matchup.

No WOWY chart here, as the three guys the Rangers will assemble the third pairing from—Kevin Klein, John Moore, and Raphael Diaz—lack the necessary samples with each other to get meaningful data. In fact, rather annoyingly, Klein and Diaz are midseason acquisitions who have very little data with the Rangers at all.

The Rangers have mostly rolled out Klein-Moore this postseason. John Moore is suspended for game 1, so we’ll see Diaz-Klein for at least one game. Whichever two of the three guys it is, they’ll make up the Rangers’ third pairing and play sheltered minutes.

Moore’s track record with the Rangers is decent (51.6% Corsi, -.9% Corsi relative this year). Midseason pickup and Red Wings killer Kevin Klein has done well with his new team, posting a 55.2% Corsi in 20 playoff games. His Corsi track record in Nashville was poor, albeit in tougher minutes. Klein might have found the right situation for himself, or he might be a liability having a fluky playoff run. I don’t think we’ll see much of Diaz after game 1, but he seems like a solid defensive defenseman.

The Rangers have gotten excellent results from the third pairing in the playoffs thus far. Still, asking these players to do any heavy lifting would be unwise, and the Rangers will avoid doing so. With Mike Richards and Justin Williams currently adding skill to LA’s bottom six, Moore and Klein are nonetheless probably in for their toughest series of the playoffs.