The Kings recently gave contract extensions covering Matt Greene's age 31-34 seasons and Marian Gaborik's age 32-38 seasons. Although Gaborik's deal might not be as long as it appears, both extensions were longer than expected and raised some eyebrows in the statistical community. As useful as Gaborik and Greene are now, the mid-30s is usually a time of rapid decline in hockey players.

Most people are more concerned about Gaborik's aging, partially for the good reason he has the longer contract. There is another, more dubious reason that I'd like to challenge: the idea that fast players like Gaborik are more vulnerable to decline than slow players like Greene.

The argument goes something like this: Gaborik relies heavily on his explosive skating to score. Speed declines more sharply and severely than other attributes like hockey sense or strength, so extremely fast players will lose their biggest advantage and decline quickly. Meanwhile, a guy like Matt Greene, who was never fast and relied on positioning and physicality, has less to lose, and can keep chugging along as the same player he's always been.

Sadly, no one has ever done a study of aging in hockey by player type. But researchers in other sports have examined this argument in numerous studies, and those might offer a clue to hockey.

The evidence in baseball is overwhelming: fast players (usually defined as those who earn a large portion of their value from defense and on the basepaths) don't age worse than slow ones of equal overall talent; in fact, fast players age much better. In the NFL, fast wide receivers age better or at the same rate as slow ones (depending on what metric you prefer to measure speed).

I know baseball and football aren't hockey. But the aging of athletes is relatively similar across sports (baseball players peak offensively at 25-26, the same age as hockey players, for example). Furthermore, the data is suggestive of an underlying argument which would apply to hockey as much as baseball or football.

All athletes lose speed as they age, whether they're fast or not. Gaborik might go from an excellent to merely above average skater over the next three years, while Greene goes from a below average skater to one of the worst in the league. Put that way, it suddenly seems like both players are equally hurt - maybe Greene even more so, since at a certain point his speed might become so bad that it's impossible for him to keep up with the play and bring his positive qualities to bear at all. That might be what happened to Douglas Murray, who was always slow and went from a solid if lumbering defensive defenseman at 29 to a possession disaster by 31.

This issue hasn't been studied in hockey (possibly because there's no easy way to categorize hundreds of players by speed), and perhaps the lessons learned from other sports don't apply. I think it's plausible that they might. Knowing that, and recognizing that there's no empirical evidence Gaborik-type players age worse, I think Gaborik's speed is no reason to worry about his aging.

There is some research on aging specific to the NHL. We know that scoring peaks from 25-26 and declines slowly until around 29 (still around 90% of prime scoring), at which point the decline accelerates (down to 60% by age 35). Eric Tulsky suggested that forwards who score by generating tons of shots age better than forwards who score by shooting for high percentages on fewer shots. This basically doesn't apply to Gaborik though, who is equal parts shot generator and sniper (13th in 5v5 sh% over the last 7 years, 22nd in 5v5 S/60).

So we can expect a significant decline for Gaborik going forward because that's how forwards generally age. The good news is Gaborik has a long way to decline and still be useful. In his prime Gaborik was an unstoppable offensive force (fifth in 5v5 goalscoring and seventh in 5v5 primary assists from 2007-2010.) Even over a less successful and injury-plagued last three years, Gaborik has clocked in at 13th in 5v5 goalscoring. This year he managed 37th (a rate better than Jeff Carter, Sidney Crosby, and Logan Couture) with a perfectly sustainable sh%. His goalscoring can decline quite a bit before Gaborik stops becoming a dangerous scoring threat.

Based on Eric's calculations, it's reasonable to expect Gaborik to lose maybe 15 to 20 percent of his current even strength scoring talent over the next three years. It's tough to estimate Gaborik's true talent because he's played so little lately, but if it's around what he showed this regular season, that would still leave him as a decent scoring forward at 35 (~100th in the NHL), though probably not too much longer after that. Of course, there's a ton of variance for Gaborik to do better or worse than these very approximate projections.

One last note on Gaborik and injuries. Players in all sports are more susceptible to injury as they age, and that's particularly worrying since Gaborik has a reputation as an injury-prone guy. I can offer two reasons for optimism. First, Gaborik actually played pretty much all of 2011-12 and 2012-13. Second, his most recent major injury (a broken collarbone that made him miss the Olympics) strikes me as a fluke that could happen to anybody rather than a sign of his body breaking down. Still, he has had a lot of knee, groin, and hip issues over his career that are likely to resurface over the next seven years. Hopefully not during the playoffs.

There has been much less research on how defensive defenseman age; Eric Tulsky's graph of Corsi over time in defenseman is about all we can do. It's not too different from the forward scoring graph, showing only a slightly gentler average decline into the mid-30s.

Although Matt Greene doesn't have a great reputation in statistical circles (as analytics people generally frown upon slow, plodding defensemen), he is actually a pretty useful player right now. Here's his dCorsi graph (Corsi adjusted for quality of teammates, opposition, and zone starts, from the awesome @Mimicohero): 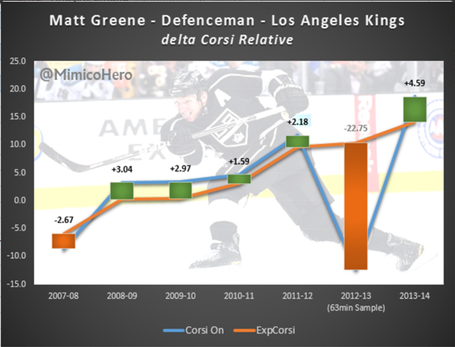 Ignore 2012-13 (he played five games) and this is a really solid body of work. Of course, Greene plays on a good team in soft minutes with a very good partner in Alec Martinez. dCorsi attempts to account for this situation (but does not do so perfectly) and thinks Greene does well on his own merits, clearing his expected Corsi% year after year.

Greene's possession numbers will probably drop off over the next four years. His Corsis are good enough that he can decline a bit and still be an acceptable sixth defenseman, if not a $2.5 million one. Injuries are a serious concern, even more so with Greene than Gaborik because Greene must play a physical style to be effective.

I mentioned earlier that I'm skeptical Greene will age well just because he's a slower player. I don't think we know enough about defenseman aging to say much about how his type of defenseman will age. There are individual examples of defensive defenseman who dropped off a cliff in their early 30s (Douglas Murray, Rob Scuderi, Brad Stuart) and others who were effective past 35 (Willie Mitchell, Stephane Robidas).

That's the thing about aging - it's always possible to come up with a comparable player who aged well or disastrously. So my advice would be to ignore specific comparisons and accept that the best we can do is to make an educated guess based on general trends, and remember that individual players can and will shatter expectations in either direction. With that in mind, Marian Gaborik's incredible offensive talent is worth betting on. Not so much for Greene, but even he is good enough to earn his contract with some aging luck.