Quick stops 32 shots in perhaps his best game of the playoffs, and after going up two goals early in the second, the Kings hold off the Rangers' best efforts to earn the shutout.

"You don't get nothing for three." -Darryl Sutter

Goodness! Anyway, in 2012 and parts of the regular season, that was the kind of save that would let the opponent know that it just wasn't their night. We wouldn't know for sure if that was the case until the second period. Until then, Quick made his four stops, and LA was able to nab the lead with just 0.7 seconds left thanks to Jeff Carter. The Rangers tried to dump the puck in deep three times and were blocked every time. The third time, Slava Voynov blocked it and immediately fired it up to Jeff Carter, who tapped it to Justin Williams. (I'm looking into rumors that it's now illegal not to refer to him as "Conn Smythe candidate Justin Williams" now.) Williams drew Rick Nash and John Moore toward him and slid a pass to Carter, whose shot nicked Dan Girardi's skate and Henrik Lundqvist's glove on the way into the net... just in time. 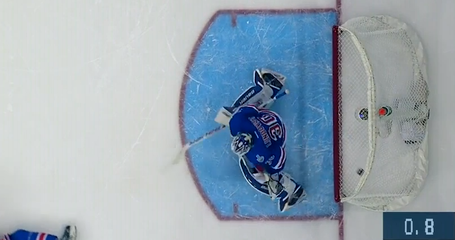 The last time I thought a goal was a dagger, the Kings were down 4-2 in Game Two and came back, so this one wasn't over by any means. However, the Rangers dug themselves more of a hole by committing the only penalty which the referees were whistling in the first half of the game: high-sticking! After killing off Ryan McDonagh's penalty, it took 19 seconds for Marc Staal to catch Alec Martinez up high, and LA cashed in a minute later. Jake Muzzin got the puck from Anze Kopitar (earning assist #21 on the play) and took a wrist shot, with Carter directly in front of Lundqvist. No other Rangers were pushing Carter away from the net, but Martin St. Louis did deflect the puck with his glove, causing it to skip past the screened goaltender.

At that point, LA kind of stopped shooting. 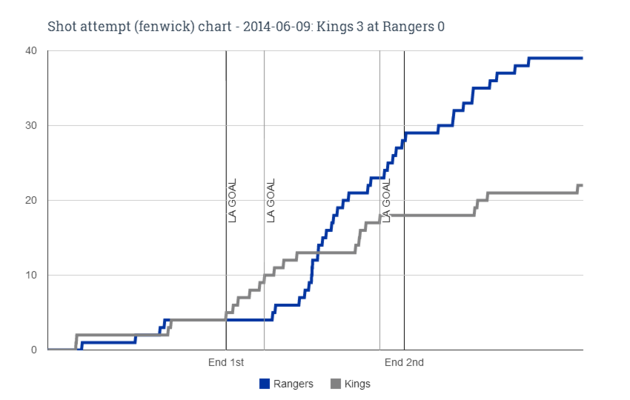 Granted, a lot of that huge shot spike came courtesy of three LA penalties, but the best chance of the period came soon after a New York power play expired. Quick was game, though, as he made a ridiculous paddle stop on Derick Brassard. Quick made 17 saves in the second period, and given the relative danger of 2-0 leads in these playoffs, any of those shots going in would have set up for a tense third period. Instead, the Kings got a goal off of a 2-on-1 when the Rangers got caught in the offensive zone. You wouldn't expect Mike Richards and Trevor Lewis to convert in that situation, but Richards' pass deflected right off of Ryan McDonagh and back on his stick. Richards quickly beat Lundqvist to make it 3-0, and it stayed that way into intermission.

And for the rest of the game, for the record. LA killed off three more power plays, and Quick stopped eleven more shots in the third period, to complete the Kings' second shutout of the 2014 playoffs. The final ten minutes went by very quickly, and after the final four minutes of empty-net play resulted in nothing, the buzzer sounded on a 3-0 victory. After two ridiculously dramatic games in Los Angeles, this one was a quiet affair. LA had to be thrilled, though. It wasn't a perfect game, but it wasn't quite Quick stealing the game, either... it looked more like a team gaining a lead and then, efficiently and calmly, putting the game to bed. And it worked.

The Kings are one win away from a Stanley Cup, and they'll have a chance to get that win on Wednesday night.