I love this man an awful lot, but I'll try to make an objective case for why he's awesome.

I'm just going to go ahead and straight up copy-and-paste Andrew's explanation for what these pretty numbers mean, since he can probably explain it better than I can anyway: This table expresses Corsi as a rate stat; the numbers represent on-ice shot differential per 60 minutes (i.e., in 2013-14 the Kings/Blue Jackets attempted 4 more shots/60 than their opponents when Gaborik was on the ice). Corsi On is just raw on-ice shot differential. A player's Expected Corsi is calculated based on the difficulty of their minutes, factoring in zone starts, quality of competition, and quality of teammates. That number is then compared to how the player actually did, and the difference is dCorsi. I also included Corsi Relative (on-ice Corsi minus off-ice Corsi) if you prefer that to dCorsi. Except in cases of extreme deployment, the two are going to be similar.

Also it's worth keeping in mind that Gaborik moved around a lot over the last few years, which will make his dCorsi numbers a little less reliable. However, the numbers that it's actually produced don't seem to vary that much, save for that 07-08 Minnesota number. Throw that out and they actually look oddly consistent, given all the movement.

When you think of the Kings, I think one of the first things that probably comes to mind is "good possession team". Yes, obviously. What's another thing that might come to mind after that? "Stanley Cups", sure. "Clean and honorable", yes, following the pristine example of their captain. But eventually you'll probably get around to shooting percentage, and their struggles with it. The Kings are not exactly a shooting percentage powerhouse, that much is for sure. As you can see here with this excellent graph, the NHL average shooting percentage tends to fluctuate a bit, but in the current era it's usually somewhere in the high 8s/low 9s range. The Kings, on the other hand, often tend to fall below that average.

As you can see, that's 3 out of the past 4 years where LA's shooting percentage lagged below the league average (and the one year it didn't was the lockout-shortened campaign). Some digital ink has already been spilled questioning whether or not there's something about the Kings' system that suppresses shooting percentage, but that's not really the point here. If we've established that the Kings are a great puck possession team that tends to have trouble with shooting percentage, wouldn't you like to see them get a player with a recorded history of influencing shooting percentage in a positive way for his team? Hey, good news: this year at the trade deadline there was just such a guy available!

All those stats are regular season, of course. So going back to 2007-08, with the exception of 35 games with the Rangers in 12-13 (and hey, that's when he fell out of favor with their idiot head coach and got traded, how about that!), teams have consistently shot better with Marian Gaborik on the ice than without him. As you all should know by now, shooting percentage is a heavily luck-based stat and should be taken with a grain of salt, and it's always worth noting that some of these sample sizes are a bit small (and more on that in a second). But that's still such an impressive record over the course of six years, with three different teams, that you would have to conclude that Gaborik has a positive influence on shooting percentage when he's on the ice. This isn't something that's counter-intuitive, either; Gaborik is a three-time 40-goal scorer in the NHL, which would certainly imply a high level of shooting talent. And it's easy to picture teams taking extra care to cover him in the offensive zone, perhaps even drawing double coverage, opening up passing lanes for teammates to end up with high-quality shots. Gaborik is an immensely effective offensive weapon, and his past possession stats suggest he will not be anything close to an anchor for the Kings in that department either. In essence, he's exactly what the doctor ordered for the shooting-percentage-starved Kings. In fact, Gaborik's on-ice shooting percentage last year was a full point better than the next best player (Alec Martinez, at 8.6%). This is a skill set the Kings desperately needed, and they were clearly a better team for it after acquiring him. That makes his resigning good news in my book.

As for Gaborik's zone entry stuff, as Nick laid out in his post on the subject, Gaborik was fantastic in his short time with the Kings during the regular season. He lead the team by carrying the puck in with control in 73% of his entries, a figure that Nick described as "stunning" (second place was another tiny sample size guy, Linden Vey, at 66%, followed by Kopitar at 65%, so he was way above even the next few guys on that list). Unsurprisingly given how often Gaborik entered the zone with control, the Kings generated more shots per Gaborik's zone entries than any other player at 0.69 (second was Kopitar again at 0.59, so again he was far ahead). It is worth noting here that the Kings in general carried the puck in with control far more late in the season (i.e. when Gaborik was on the team) and it probably had something to do with their weak competition (they played such luminaries as Edmonton twice, Calgary twice, Toronto, Winnipeg, Phoenix, Philadelphia, Washington, etc) in that portion of their schedule. But even with those caveats, those are still very encouraging numbers, and it will be interesting to see what he does in this regard in a full season next year.

That is, of course, if he plays a full season. I don't like blaming a player for injuries because I think it's usually not really in their control, but you can't really not mention his injury history. He's played a full 82 games just once in the past six seasons (though he did play 47 out of 48 in the lockout year), and last year was no exception there, as he played just 22 games for the Blue Jackets before he was traded to the Kings on March 5th, sitting out with a sprained left knee in November and then a broken collarbone in December. The only good news there is that neither injury seems to be related to his frequent groin problems that have plagued him off-and-on throughout his career. If both were just freak accidents, hopefully you cross your fingers and hope for the best. He's actually followed a pretty consistent pattern of alternating one year with frequent injury troubles/one year without as much over and over and over again, so perhaps he's "due" for another healthy year! Yeah!

Also, he's old and stuff- 32 to be exact, and he'll turn 33 in February of next year- so that's also certainly not a positive, especially since he's now under contract for the next seven years. I think it's safe to predict he should have at least one more season at a top level, maybe even two or three, but beyond that his decline could get steep in a hurry (especially if it's exacerbated by yet more injuries).

You guys, I don't know crap about Roman history. Andrew actually offered to pick an emperor for me, but that seemed just kind of fake and inauthentic to me, and we should probably avoid fake and inauthentic things in this article. This is my season review, so I shouldn't try to piggyback off of Andrew's impressive knowledge on another subject. I could do what Eric did for his review and just not compare him to anything at all, but that's boring (and this article clearly isn't long enough yet). So the real solution is to find some other subject I consider myself an expert on, like Andrew did with Roman history. Japanese rock bands? Yes, but none of you will know what the hell I'm talking about (not that you did with the Roman emperors either; put your hands down, readers, who are you kidding, you did not). Old pro wrestling? Aha, there we go, that should work. So, because 2000 WWF is the absolute peak of North American pro wrestling (and do not argue with me about this because you are wrong), here is your: 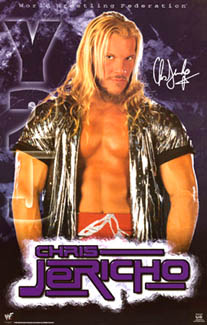 Chris Jericho is a relatively easy choice for Marian Gaborik's comparable. Like Gaborik, Jericho came over from a poorly-run organization. If we pretend Jericho was traded for Jeff Jarrett, who debuted in WCW a few months after Jericho first appeared in the WWF in the second half of 1999, the analogy makes even more sense; I like Jarrett, but the difference between Gaborik and Matt Frattin is roughly equivalent to the difference between Jericho and "J-E-Double-F, J-A-Double-R, E-Double-T-HA!", no matter how many NWA World Titles he would later book himself to win. And like Gaborik's on-ice shooting percentage boost was exactly what the Kings needed, Jericho brought a much-needed dose of workrate to the WWF's famously bad undercards. Quick, try to name a great WWF undercard match in 1999 that didn't involve a ladder or Shane McMahon taking bumps through tables. It's a trick question, 'cause it doesn't exist. On the other hand, Jericho spent most of 2000 having phenomenal Intercontiental Title matches with a guy I'm not going to mention 'cause thinking about him makes me sad. His weird on-again, off-again feud with Triple H and his storyline wife Stephanie McMahon (thank god she wasn't really his wife, that would just be awkward and give him way too much backstage power) was another highlight, producing the infamous WWF Title reign that didn't count and culminating in the amazing Last Man Standing match on the undercard of Fully Loaded 2000 (a criminally underrated show, by the way; people were just mad at the time that none of the newer guys went over, but who cares about that now). He was a big reason why the WWF actually had good pay-per-views in 2000, instead of just good pay-per-view main events. Big difference.

As mentioned already, Gaborik is old, but unless he suddenly has a significant drop off next season, he should continue to be a great driver of offense and on-ice shooting percentage for the Kings. Of course, the big concern with him will always be whether or not he can remain healthy, but barring injury trouble, he should help the Kings produce more offense next season.

If you're willing to give his partial season a full grade, and let's just do it because who the hell wants me to say "incomplete" here, I fail to see how you give him anything other than an A. Of course, it helps that he scored fourteen freaking goals in the playoffs and was one of the primary reasons why the Kings won their second Cup in three years. We should probably give him some credit for that too, even though it's unlikely he'll shoot 20% every spring he spends with the Kings. Actually, you know what, let's just assume he's going to do exactly that, because why not?