Rethinking the NHL point system: A small change that would lead to more competitive play

[The following is an article we are posting on behalf of JFTC member CaseyMil (twitter: @CaseyMil).]

Share All sharing options for: Rethinking the NHL point system: A small change that would lead to more competitive play

This is my first time writing anything that isn’t academic so bear with me.

I just graduated from the University of Redlands with a degree in Financial Economics. Because we are a private liberal arts school, my final paper for my major can be on any topic I choose. I wanted to do something with the NHL and this is what I came up with. It may get a little ‘mathy’ but in the end the concepts are simple.

A lot has been written recently about the negative aspect of a shootout. For obvious reasons, it’s a terrible way to determine a winner and while the spectacle is popular, pure fans remain frustrated with its growing importance in the regular season. What my paper sought to find was if there was a way to mathematically represent the negative effects of having the shootout and to propose a system that would be better for competitive play.

I wanted to show how having a shootout could actually encourage defensive play during the final minutes of a game. Before I go on, I need to define a few things. I supposed that teams had two possible strategies to adopt: aggressive and defensive. When I say ‘defensive’ I don’t mean that a team is playing defense the whole time. Playing a defensive strategy refers to a team taking less risk. For example, maybe a team won’t try stretch passes or instead of carrying the puck into the zone, they shoot it in. Conversely, 'aggressive' doesn’t mean playing with the puck the whole time, it’s a team taking chances to increase their own probability of scoring (but at a cost).

Now that I’ve defined aggressive vs defensive play, it is important to see some of the variables at play in my model. For each possible outcome of a game, there is a certain probability that event will happen (which is different for each team depending on talent, home ice, etc.). And without getting into what specifically each probability is, there are some assumptions made about the difference between aggressive and defensive play. 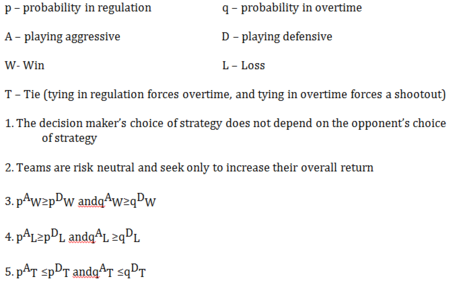 It reads just as it looks, a win in overtime gets you 2 points, so 2 times the probability that event occurring

; a team gets 1 point for a loss in OT, so 1 times the probability that a team loses in overtime by playing aggressive. I use 1.5 because I assume the SO is a ‘coin flip’ and teams will get 2 points 50% of the time and 1 point 50% of the time.

Because of my simplistic approach, comparing the weights is easy and actually really meaningful. After simplifying, this is the condition for playing defensive in OT:

For this condition, it is not clear whether teams would want to play aggressive or defensive. Overall, I decided it wasn’t as important because of the other rule changes the NHL has implemented (4 on 4 OT play) will likely encourage aggressive play, but with this in mind, lets look at the options for teams tied in the final minutes of regulation.

After finding the OT conditions, I was able to compare regulation aggressive vs defensive play. This is the simplified inequality condition for playing defensive in regulation (this is where things get meaningful):

The two K’s represent constants for the expected value of a game going to overtime. Now this probably doesn’t look like much to you, but this is concrete evidence that almost every team (if not every team) would have clear incentives, just based on how points are handed out, to play defensive in the final minutes of regulation. I think this is something that is actually observable. How often do we see teams sitting on the puck in the defensive zone as the seconds wind down? Now this paper would be pretty useless if it didn’t have some type of ‘policy recommendation’ so don’t worry, I’m not done yet.

In a perfect world, there is no shootout (teams tie at the end of OT and each get a point), and this whole problem goes away. However, it isn’t very reasonable to expect the NHL to get rid of the shootout with its popularity among casual fans (a casual fanatic is an oxymoron but I digress). Instead, I have proposed a 3 point system that can fix most of the problem. Overtime and shootout points would be awarded the same (2 points for winning in OT or in the SO, 1 point for losing in OT or in the SO). However, if a team wins in regulation, they would be awarded 3 points. I did some backwards analysis looking at how this would affect standings and some teams move up one, or down one, but for the most part they don’t change much. When I reapply my analysis used earlier, the new condition for playing defensively in regulation is as follows:

This doesn’t completely get rid of the possibility of teams' incentives to play defensive in the final minutes in regulation but it opens the door for other teams to have incentive to play aggressive in the final minutes of regulation. It seems like a no-brainer to me that the NHL should want this. They are talking about switching sides in OT (for the long change) and I think the NHL should still do that, but if they are willing to change the structure of the point system just slightly, we could possibly see a much better product on the ice.

I’m currently working with my professor to get it published in the Journal of Sports Economics and I’ve been dying to share it with others. Let me know what you think or if you have any questions in the comments.