Jonathan Quick - Statistics as a Starter

How'd he do it? Despite the ups and downs of Quick's regular season and the groin injury he sustained in November, his even strength save percentage was an excellent .929, which would place him 7th overall in the NHL.

After a terrible 2013 regular season, this is considerably more encouraging even if it doesn't match the heights of his 2012 campaign. In fact, it's right around what we should have expected if we looked for a return to form; Quick's even strength save percentage in the four years prior was .926. The caveat is that Quick's overall SV% was dragged down by his performance when the Kings were on the PK, but we'll get to that.

So how about his playoff performance? After two horrendous games up at the SAP Center to start the postseason, Quick posted a .919 save percentage over the remainder of the playoffs. That's slightly above average during the regular season; against the Sharks, Ducks, Blackhawks, and Rangers, that's considerably better. And after three rounds in which the Kings' offense drove their success, Quick's .932 save percentage was crucial to the eventual series win.

Before we get to (more) discussion of save percentage, a note about Quick's style. In contrast to the restrained style of a Jonathan Bernier or a Martin Jones, Quick plays aggressively. He cuts down angles by coming way out of his net. He uses his (superb) poke-check quite liberally. He plays the puck a bit more than anyone would like. He finds himself leaving an open net on a regular basis. And he makes spectacular saves on a regular basis.

The way Jonathan Quick plays is always going to earn him more praise AND more blame than he deserves. So I'm not putting it in either section.

Despite his solid even strength numbers, you have to scroll well down the list of starting goaltenders to find Quick's name on the overall save percentage list. Out of 25 goalies that played half of their team's games, Quick is 15th with a .915 save percentage. That puts him right between Corey Crawford and Marc-Andre Fleury, two other heavily scrutinized goaltenders on excellent teams. The main reason is that Quick struggled to make stops on the penalty kill: his .866 save percentage while shorthanded was well below league average.

So, you can pretty much chalk up that Jennings Trophy to the team's excellent defense. Here's his rolling save percentage for the season. The axis in the middle is set at the league average save percentage of .914. 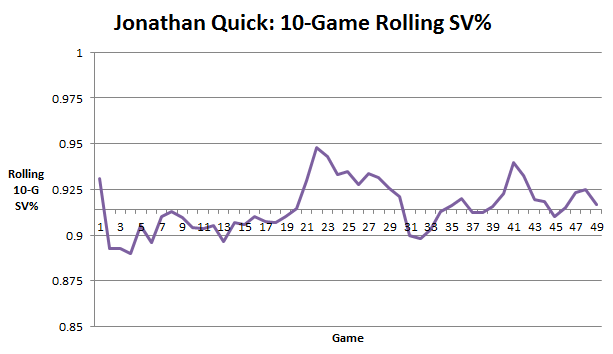 Quick's overall save percentage was a hair above league average, so it makes sense that he'd have spells both above and below. As you can see, the first third of the season was particularly rough. Coincidentally, that's also when he suffered that groin injury. [EDIT: That is, he sustained his injury right at the end of that slump.] He was considerably better immediately after his return, though over the last two months he has his good and bad stretches. Quick wasn't THAT inconsistent this year, but because we're greedy, we'd expect more than what we got.

As for the playoffs, he wasn't at his best early against San Jose, and he had a lot of trouble against the Blackhawks. The fluky goal allowed to Patrick Sharp in the first period of Game Seven could have been the defining moment of the season for Quick, and a number of fans called for Darryl Sutter to insert Martin Jones. The fact that the notion wasn't totally crazy sums up the lower points of Quick's season.

(Quick turned the narrative around by holding the Hawks to one goal from that point on, including a huge save in the final ten seconds.)

One minute and four seconds later, Mike Richards scored to put LA up 3-0. Series over.

(And yet, it's possible that we can find not one, but two better Perry-Quick moments in this series alone.)

I feel self-conscious doing this, so I'll keep it short. He's well renowned and perhaps the most popular, though his reputation might outshine his true ability. However, there's no doubt that he has proven himself at the most important times. He has a temper. He's stuck with the Kings since the beginning. In terms of style, he's probably never going to evolve. 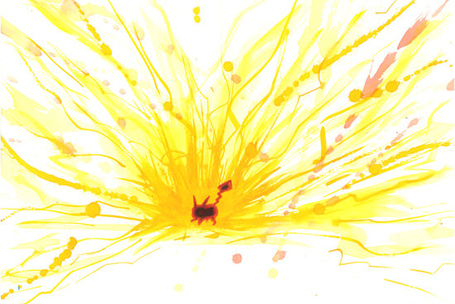 Jonathan Quick is the starter. He will be the starter for a while. That's pretty much it.

I'm tempted to give him a bump for his Stanley Cup Final performance, but he was average this year and certainly had his share of playoff struggles. The constant debates are always about how Quick is amazing or Quick is terrible, so a C seems fitting.