After two years of playing with Hobey Baker finalists, Brodzinski looks to become a college star in his own right.

I'm a fan of this guy. Not just because he, like me, has a brother who wears a rival team's colors.

Brodzinski was a bit off the radar last summer, garnering a couple votes for this countdown but not finishing in the Top 25. Not through any fault of his own, though; he was a freshman at St. Cloud State who was coming off of a 20-goal season, which is nothing to sniff at in the NCAA. This year, he reached 20 goals once again, but also hit 20 assists and led SCSU in scoring. The Huskies came up one game short of a second straight Frozen Four appearance, but Brodzinski was instrumental in SCSU's first round victory over Notre Dame, picking up a goal and an assist. Brodzinski earned his share of individual honors for his performance, including an NCHC Player of the Week nod and an all-NCHC Honorable Mention.

His offensive numbers already place him in the upper echelon of Kings prospects. Earlier this summer, Robert used a statistic called NHLe (which takes prospect point totals and weights them based on the quality of the league they play in) to rank the Kings' prospects in 2013-14. Brodzinski ranked fourth in the organization, behind Linden Vey (traded), Nikolai Prokhorkin (seemingly trapped in Russia), and Jordan Weal (dynamic, but undersized). Brodzinski's not without his own obstacles, but the big questions on draft day revolved around his consistency and his motivation. These past two seasons have been a positive indicator in those departments, and he's being touted as a potential Hobey Baker contender next season...

We're also glad to note that, according to his Twitter account, Brodzinski was very much on board with the Kings this year. 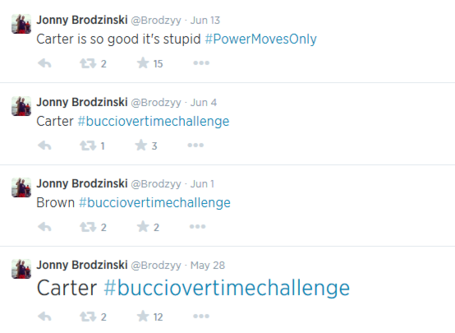 Are there lingering questions about Brodzinski? Absolutely. For one, he was an overager when drafted. Like Tanner Pearson, Brodzinski was a 20-year-old who had been passed over twice in the NHL Draft when the Kings took a chance on him. However, Pearson was in the top 50 of every meaningful pre-draft ranking, while Brodzinski was an afterthought at #132 in the North American Central Scouting rankings. In short: the pedigree isn't necessarily there, and while he was the age of a college senior last year, any achievements from here on out might be seen as those of a player beating up on younger competition.

The other interesting factor is that Brodzinski has played with talented teammates at SCSU. St. Cloud State had Hobey Baker finalists in both Drew LeBlanc (the 2012 winner) and Nic Dowd (a 2013 finalist and current Manchester Monarch), and Brodzinski primarily skated with both in their stellar seasons. As SB Nation College Hockey noted last year, it took a broken leg for Brodzinski to get a shot with LeBlanc; what would have happened if Brodzinski had toiled away on a lower line all season? It's going to be interesting to see how Brodzinski performs as St. Cloud State's go-to offensive weapon. His underwhelming USHL numbers prevented him from getting drafted, and any recurrence of that performance would raise a red flag.

The goal for Brodzinski this season is to maintain or improve his offensive performance, while making strides in the rest of his game. This interview with Hockey's Future summarizes Brodzinski's efforts to improve his skating and his performance on the defensive end, and his appearances at the last couple Prospect Camps should have helped him realize what it'll take to crack the Kings' lineup in 2016 or so. There's an opportunity for one of the Kings' many right wing prospects to emerge in the next season or two; a strong 2014-15 at least puts Brodzinski in the conversation.

Plus, you gotta admit it'd be fun for both he and his brother to be a part of the LA-SJ rivalry someday.