The Kings have announced their three Legends Nights for the upcoming season, and the lineup is particularly appealing if you were a Kings fan in the '90s. Tony Granato and Barry Melrose will get the royal treatment on February 12 and February 24, respectively. Luc Robitaille, however, gets a more permanent honor: a statue in front of Staples Center. He totally deserves it, too.

At the very least, the Jim Fox Legends Night bobblehead on my desk is nodding in approval.

From the press release:

Robitaille is the NHL's all-time leading scorer among left wingers, and has three Stanley Cup rings: one as a player with the 2002 Detroit Red Wings, and two as President of Business Operations for the 2012 and 2014 Los Angeles Kings. He's done a huge amount of charity work in Los Angeles, and his number hangs from the rafters of the Staples Center. It's safe to say the Kings wouldn't be where they are without Luc. 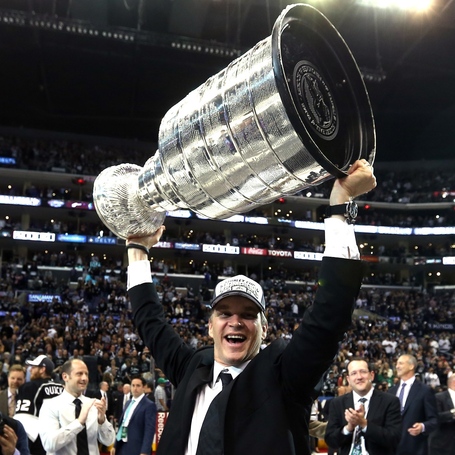