Yes, this is apparently a thing that we're doing, for some reason.

As far as 4th line players go, I suppose there are worse ones out there than Nolan. When looking at his dCorsi this year compared to 2012-13, he definitely managed to improve from those incredibly awful numbers. I certainly wouldn't call his play "good", especially with all the built-in advantages he had due to his usage, but he didn't get killed nearly as badly this time around. Let's give him a nice little golf clap, I guess.

A big problem for 4th line forwards tends to be taking a lot of penalties, and Nolan really isn't any different, as his 1.9 penalties taken/60 ranked second-to-last on the team (minimum 41 games played), ahead of only Kyle Clifford's 2.3. However, unlike Clifford Nolan was able to balance this out a bit by also drawing his fair share of penalties, enough to actually be above water in penalty differential. In penalty differential/60, Nolan actually ranks tied with Kopitar for 3rd on the team with +0.4; compare that to Clifford, who is all the way at the bottom with a -1.1. Good work Jordan!

Also, Andrew mentioned in his Lewis article that the median NHL 4th liner put up 1.04 pts/60 last season. Guess what Nolan's points per 60 minutes were? 1.04. In this regard, Jordan Nolan was basically the baseline 4th liner in the NHL last year. That's certainly better than, say, Trevor Lewis (0.68) and Kyle Clifford (0.67), so way to go Jordan!

Well, those possession numbers are clearly quite garbage, yes. Better than the tire fire he was in 2012-13, but still garbage nonetheless. Considering how easy his minutes are- go look at the Kings' player usage chart and try to find Nolan's bubble, it's the tiny one all the way at the bottom (easiest competition) and to the right (easiest zone starts), so it's not hard to miss it- that's pretty unacceptable.

It doesn't get much better for Jordan when you look at his zone entries or scoring chances, although you probably wouldn't expect it to. Nolan carried the puck over the blue line with control just 40.28% of the time, beating out only Kyle Clifford and Dwight King in this regard. Even when he did carry the puck in, the Kings usually failed to generate shots on goal with it, as his 0.56 shots per carry-in only beat out Dwight King.

In scoring chances, Jordan Nolan was especially terrible. When Nolan was on the ice, the Kings' opponents had 58.5% of all scoring chances. As Nick pointed out in his breakdown, that essentially meant every opposition player suddenly played like Anze Kopitar against him. As we've already been over, Nolan faced the easiest competition of any King, so basically we're talking 3rd- and 4th-liners suddenly playing like the great Anze here. That's, uh, really bad. Even the second-worst King on the team, Trevor Lewis, was nowhere close to Nolan's terribleness, as he conceded 54.6% of scoring chances to the opponents. 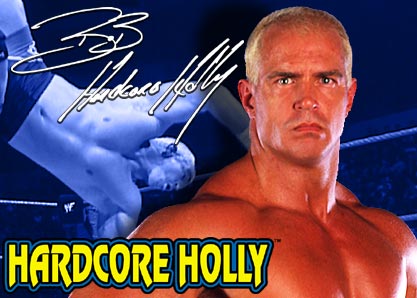 Hardcore Holly, like Jordan, had already been around for a while, only to find himself surpassed by newer, younger, and more entertaining acts like Chris Jericho, the Radicalz, the Dudleyz, the Hardyz, and others who had started far more recently. Originally given a stupid race car driver gimmick as, I swear to god, Thurman 'Sparky' Plugg (later changed to Bob 'Spark Plugg' Holly, which I guess sounds a little less stupid sure), Holly broke out in 1999 in the WWF's hardcore division, hitting people with random crap to hide the fact that he wasn't very good. By the time 2000 rolled around, Holly had even begun to wear out his welcome in his very limited role. It didn't help that the WWF needlessly shoehorned him into the very fun Jericho-Chyna Intercontiental Title feud at the Royal Rumble, either, but thankfully he would be back to swinging random plunder by WrestleMania (just like Jordan actually started out the playoffs in the lineup ahead of Tanner Pearson but was back in the press box before too long).

Basically, every time Holly was on-screen, you probably thought "I would rather be watching someone else, like, say, his fake cousin Crash, at least that guy's funny". He wasn't totally useless, I guess; he could be amusing sometimes as the straight man to the aforementioned Crash Holly. But calling him even "an okay wrestler" was probably a hell of a stretch, and when you compare him to the rest of the WWF's stacked roster in 2000, he looked almost laughably bad. Sounds like someone we know!

Hopefully he doesn't play much. He only saw the ice in three playoff games for the Kings this year. With Tyler Toffoli & Tanner Pearson now looking like full-time NHLers and a few other kids possibly challenging for roster spots in the upcoming camp, it's easy to see Jordan getting his fill of press box popcorn this coming season. That's probably for the best, as it's tough to argue the optimal Kings lineup involves dressing Jordan.

You know, I almost wanted to give him a C, because for a 4th liner at least he drew more penalties than he took and scored at the median 4th line rate. That's not too awful. But his possession numbers were bad and his scoring chance numbers were amazing horrendous, so I really have to go with a D. Sorry Jordan, I'm sure you're a swell guy!