(Editor's Note: Some excellent analysis here, and the conclusion isn't necessarily what you're expecting. -Eric)

In the endless war between stats nerds (read: Corsi advocates) and traditionalists (read: eye test, grit/heart/gut/intangibles), two names inevitably come up for Los Angeles Kings fans - Jake Muzzin and Robyn Regehr. Readers of JFTC are also no strangers to these names. Where the two approaches to player evaluation tend to come at odds are determining what data is valuable. Advanced stats often value large sample sizes, whereas a more traditional evaluation of a defenseman may focus on their physical, punishing play on a given shift.

Indeed, it can be hard to express the value of a single Corsi, and the desire to value one Corsi event over another is natural. It stands to reason that if we could visualize these events on a time scale with some knowledge of the situation on the ice, it may begin to give enough context to ease those mistrusting of a single number to evaluate a player. Of course, Corsi numbers can already be adjusted for zone starts and players on the ice, but presenting this info on a time scale begins to form a picture without seeing a single frame of game footage.

Muneeb Alam, writer at fellow SB Nation affiliate Japer's Rink, compiled data such as this, visualizing defenders' Corsi over time after faceoffs for a total of six scenarios - a win or a loss in each of the three zones. While this data is not published or retained by any of the major stat blogs, it is interesting to examine in order to gain an understanding of certain players' strengths and what their optimal deployments may be. What better players to compare than Corsi darling Jake Muzzin and grizzled veteran Robyn Regehr?

Muneeb was kind enough to share this data with me for LA defenders for the 2011-2014 time period (so it includes no data from the 2014-2015 season). Each graph shows the number of shot attempts (corsi) both for and against over a time period of 45 seconds while a particular player is on the ice, sorted by zone start and faceoff result. Also shown on these graphs is the team's average shot attempts for and against under the same conditions without that player on the ice. After that 45 second period from faceoff result, the numbers tend to normalize to an 'open-play' value where the significance of the faceoff has pretty much eroded entirely. Also keep in mind there's no control for quality of teammates or opponents, though one of these is not as signficant as the other. It's also important to note that while the data stretches back to 2011, Muzzin and Regehr's time with LA is mostly 2013 and onward.

In this scenario, LA has lost a faceoff in the defensive zone and the objective has become to exit the zone with control of the puck. It's not hard to imagine that this is the worst scenario for shot attempts against. Let's take a look at Regehr first. 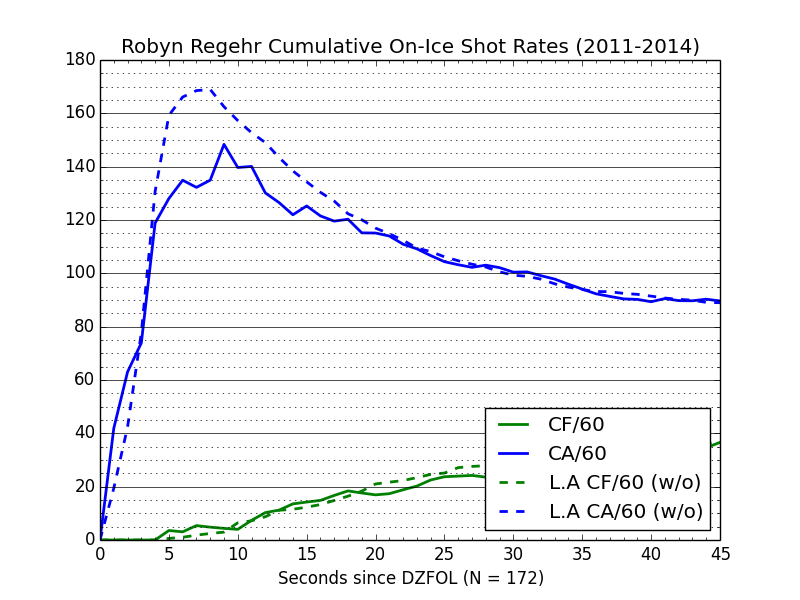 Here we see that Regehr's shot attempts allowed after the defensive zone faceoff loss are actually fairly good. In the five to fifteen second period after the faceoff, Regehr seems to have been able to stop the opposing team from generating shots directed at the net. His shot attempts for are merely average, suggesting perhaps that there is no exceptional zone exit talent to his game. This would somewhat fall in-line with his reputation of doing well with tough zone starts. Now onto Muzzin. 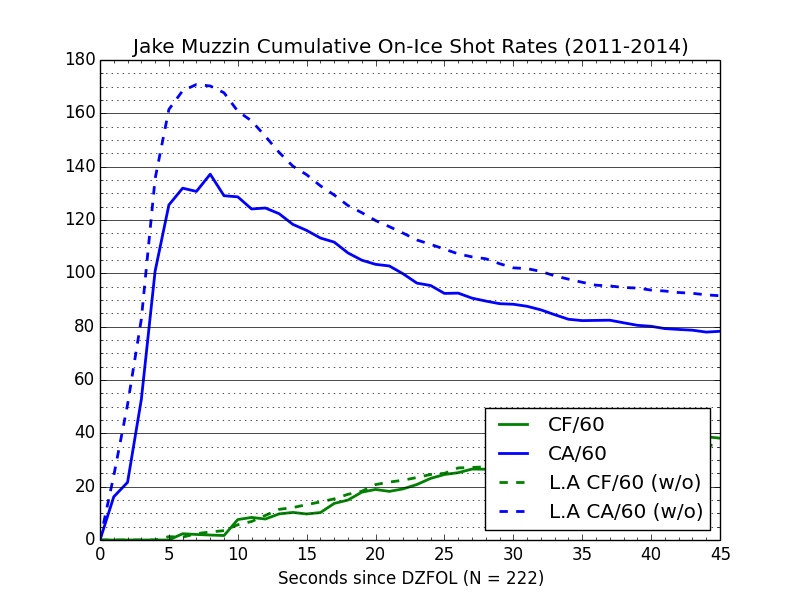 Woah. Jake Muzzin has a clear advantage over Regehr in that same five to fifteen second period, but impressively continues to beat the team average for the entire tracked 45 second duration. His shot attempts for also seems to fall on the team average. This seems to suggest that Muzzin is not only great denying the first shot attempt off of a faceoff, but perhaps also great at stopping puck cycling and other things that extend zone time, ultimately facilitating a zone exit. Now let's look at defensive zone faceoff wins. 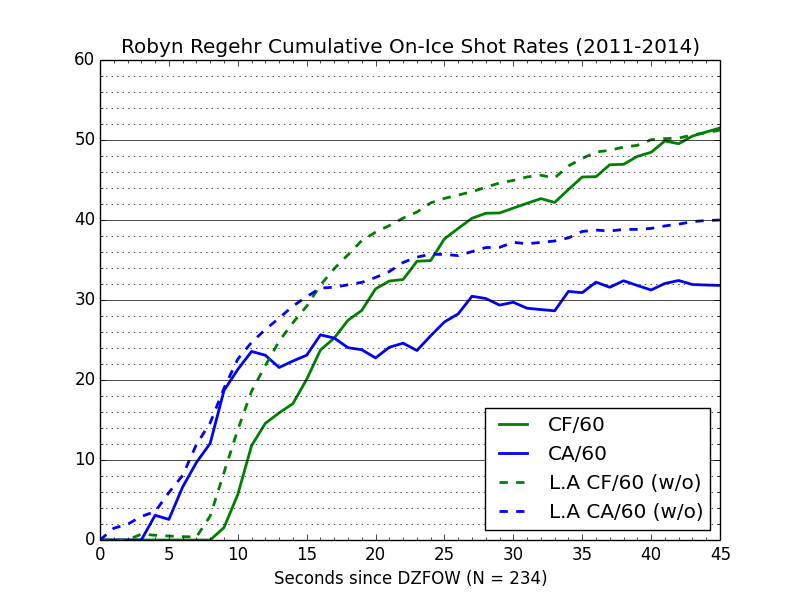 Defensive zone faceoff wins also paint a positive picture for Regehr in suppressing shot attempts after the faceoff. This seems to suggest that Regehr is definitely not hurting a zone exit once the faceoff is won, and is probably not giving the puck up in the neutral zone a lot. However, the shot attempts for picture is less rosy, consistently below team average. Regehr seems to have hurt the team when they are trying to enter or keep the zone after they've won a draw in their own zone. Now to Muzzin. 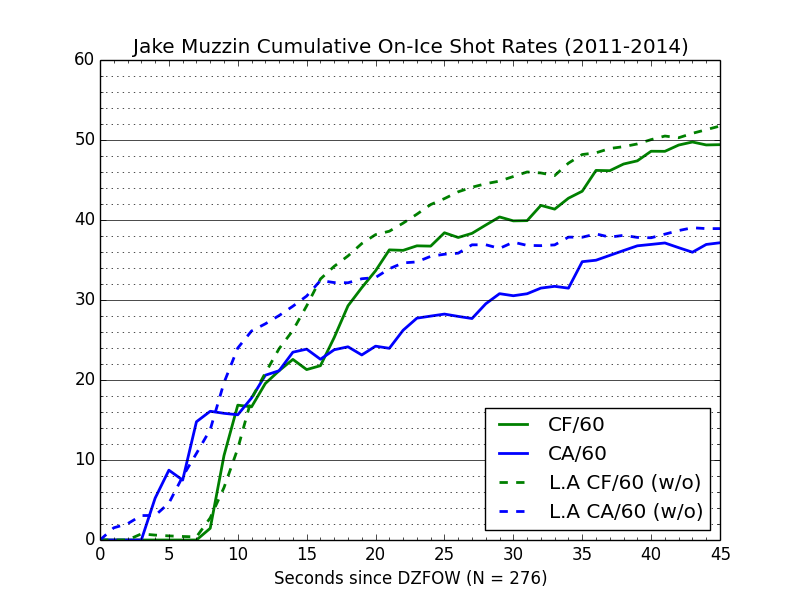 Here we have results that are remarkably similar. It seems Muzzin helps his team leave and stay out of the zone, but doesn't quite match up to the team average when entering and keeping the zone to generate shot attempts. Now we'll move to neutral zone results. 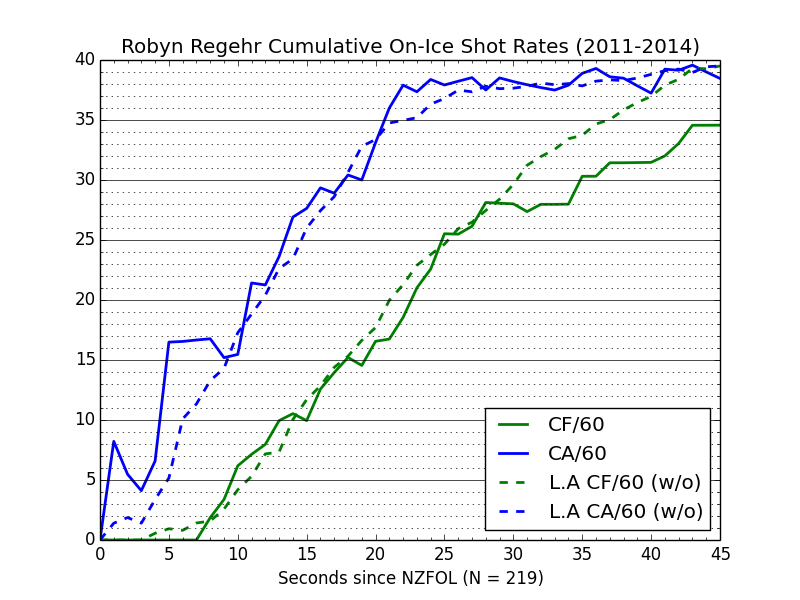 Interesting results here. Assuming the large spikes in shot attempts allowed aren't aberrations, the opposing team seems to be able to get into the zone quickly and fire a shot at LA's net. Perhaps this is where criticisms of Regehr's speed are valid, and he simply fails to establish position quickly enough. He mostly returns to team average thereafter. Shot attempts for is intriguing due to the detour from team average only after the 30 second mark. What could be going on here? Perhaps an inability to hold the zone after his team's grasp on it is rather tenuous, or maybe it's just a failure to generate zone entries after a prolonged neutral zone battle. Let's look at Muzzin. 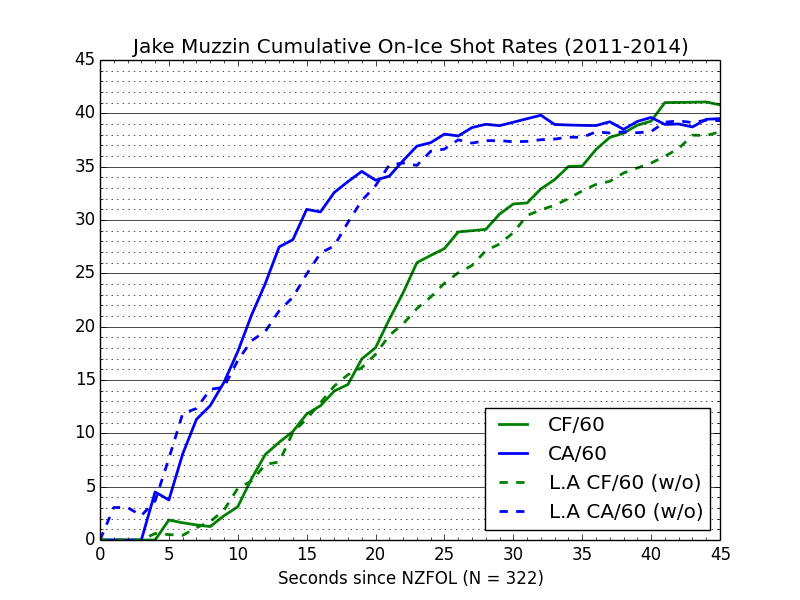 Muzzin's results here don't establish him as a clear winner. His shot attempts both for and against seem to be slightly higher than team average. This may be because Muzzin is more likely to attempt a play on the puck rather than use his body to stymy his opponents' progress. Muzzin also seems to have an advantage in those first few seconds before falling below team average, likely denying quick zone entry chances. The end result is that both teams seem to find entering the zone and generating a shot attempt bit easier, though Muzzin does seem to have a clear advantage in shot attempts for as things settle down. 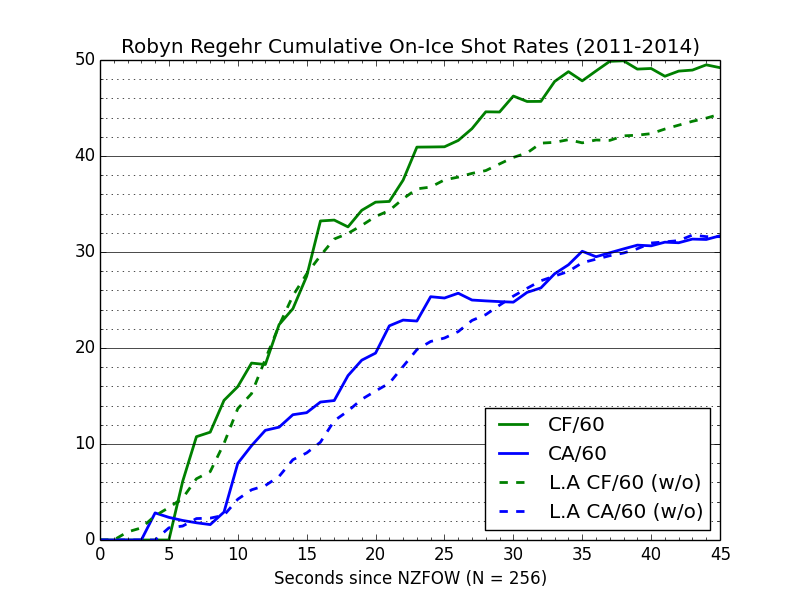 Regehr's numbers look fairly respectable after a neutral zone faceoff win. His shot attempts against deviates above team average a good bit for a significant period after the faceoff, but his shot attempts for is significantly above average after the 20 second mark, and simply grows. What we seem to be seeing is that he's bad at defending a zone entry and shot attempts after a neutral zone turnover, but very good at holding the zone after his team's entry has been established. 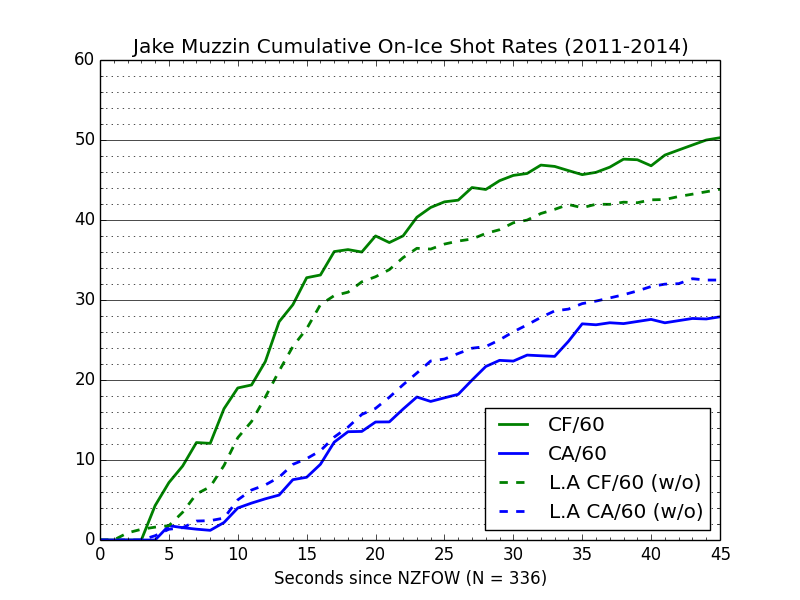 Here we have another scenario where Muzzin demonstrates himself as a superior performer as soon as the puck is dropped. He is better than team average in both suppressed shots and generated shots all the way to the end of the tracked period. If his team has entered the zone, he helps keep the puck in, and if the opposing team controls the puck, he's either denying the zone entry or denying shot attempts after they do. 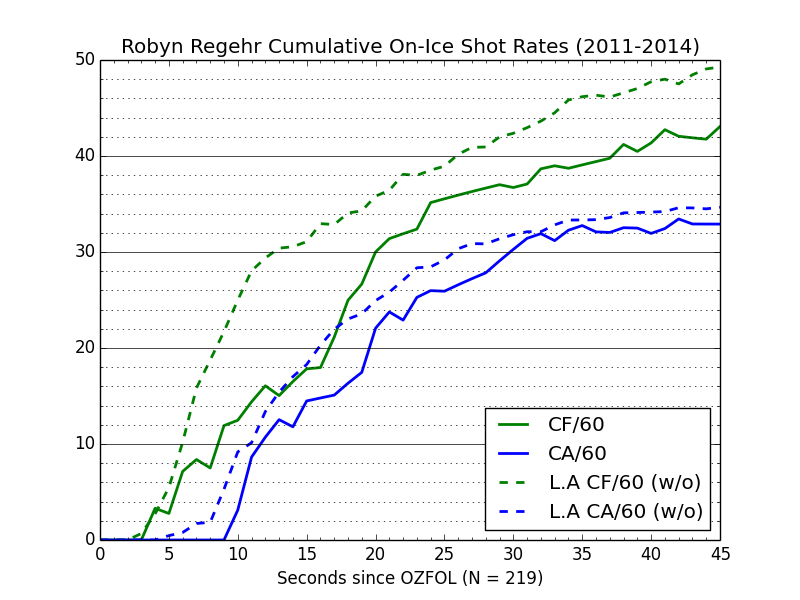 Here we see Regehr's worst result yet. If his team has lost the faceoff in the offensive zone, he seems to be very poor at keeping the puck in to generate shot attempts.In fact, his average dips so low that there is a period where LA, on average, is more likely to allow a shot than Regehr would be to help generate a shot attempt. However, Regehr does consistently outperform the team average for shot attempts allowed. Perhaps this is conservative play kicking in, where he prioritizes getting position and denying zone entries over keeping the puck in. 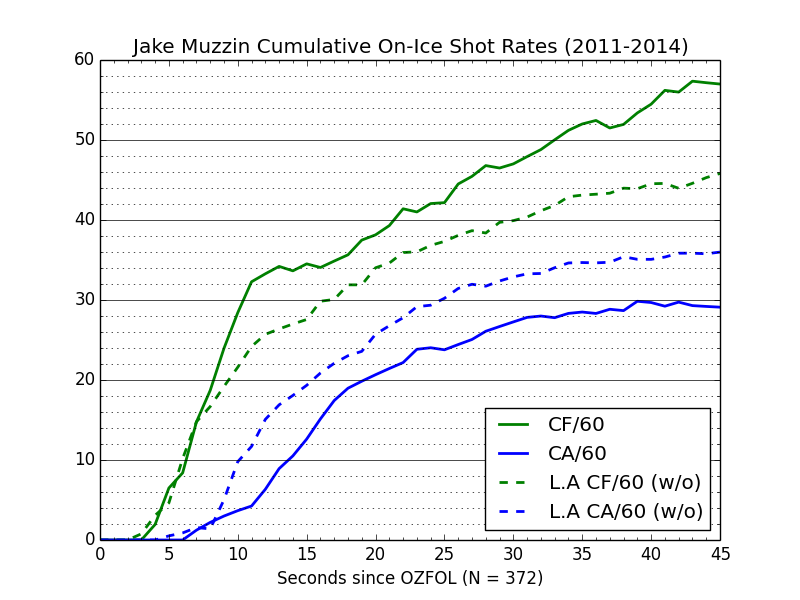 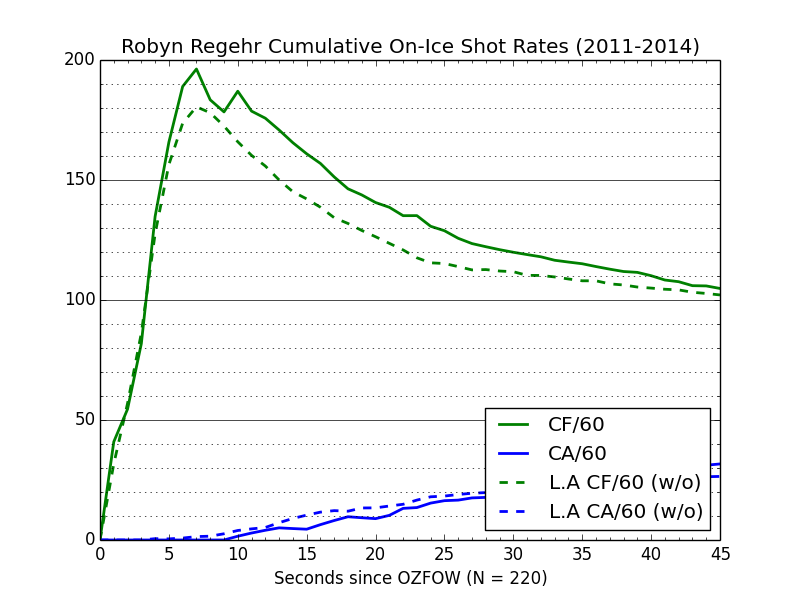 Regehr has respectable results in this scenario. He seems to be consistent at holding the zone when his team comes out on top on a draw in his opponents' zone. He skims slightly under the average for shot attempts allowed, establishing himself as a helpful player in this scenario. 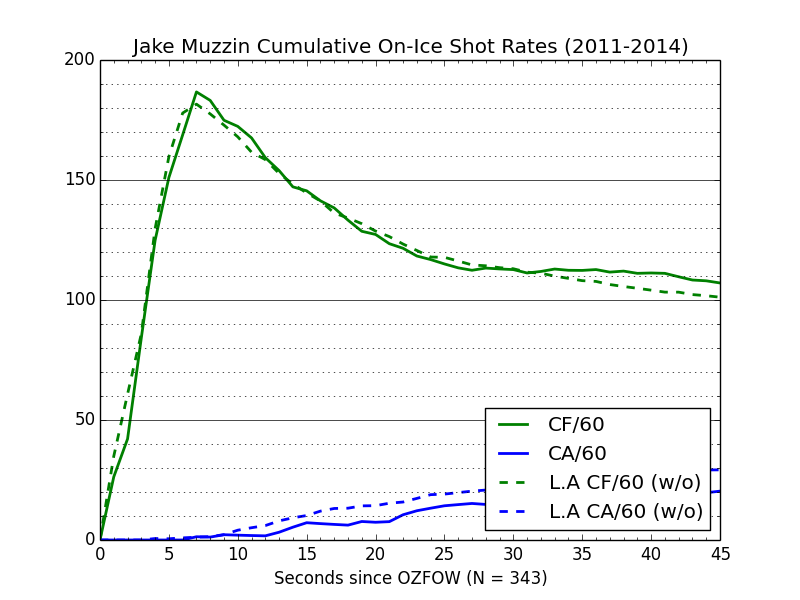 In this situation, Muzzin seems to be mostly average at generating shots once his team has won the draw, with a slight uptick for what would be an extended shift. He does show superior performance to both the team average and Regehr in shot suppression, which means he is likely fairly good at denying zone entries once it's clear the puck is headed the other way.

By this point, I would expect that no matter where you fall on the debate of how to evaluate a defenseman, one of these scenarios left you surprised. While Muzzin proves himself to be a great shot suppressor, there's some situations where's he's just average at generating or suppressing those attempts. There's also situations where he stands out as a shot generator, while his shot suppression doesn't seem that outstanding.

Regehr, who is constantly criticized for his speed and his hesitancy to contribute offensively, seems somewhat deserving of his reputation as a stay home defender. He seems to be able to stop his opponents from shooting the puck when he's starting in the defensive zone. On top of that, he's not always terrible at helping his team generate shots either.

Perhaps by looking at these scenarios, we can examine them with what we think the players' assets are, and visualize what his team would be trying to accomplish at that time. Muzzin seems to be great at most situations, while Regehr's successes are definitely more muted and fewer in number. However, there does seem to an argument for how deployment matters, and that it may not be a disaster to deploy someone like Regehr in every single situation.

What is certain is that this kind of data can be a great springboard for discussion. I encourage everyone to look at the data for other players and come up with your own theories for discussion. Also be sure to give Muneeb a follow on twitter for plenty of insight into the Washington Capitals and hockey in general.

This item was written by a member of this community and not by an author of JFTC.