Martin Frk stole the show with his record breaking slapshot, but everyone had a good time during the skills competition.

Share All sharing options for: Fun Reigns on Unforgettable First Day of the AHL All Star Classic

All Star weekends are supposed to be fun and the host city of Ontario certainly had no shortage of that on an unforgettable first day. It all began with a fun fan fest and the Reign literally rolling out the red carpet to welcome their visitors—both of the human and more animated variety. 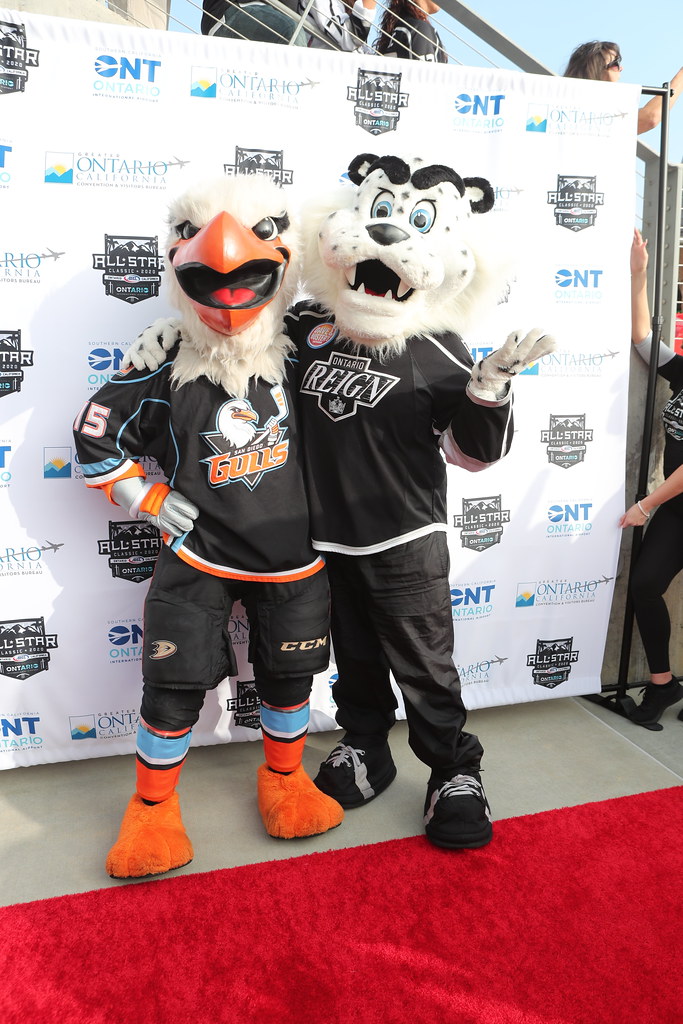 During player introductions, the loudest cheers were, of course, reserved for Kale Clague, Martin Frk, and Cal Petersen

—and the loudest boos for the San Diego Gulls players—but there was also a lot of love for former Reign and LA Kings player Matt Moulson.

The on-ice festivities began with a puck control relay. Clague showed off his smooth skating style with short strides and was in control until he lost the puck at one of the last few pylons.

The second event was the fastest skater, which neither Clague nor Frk participated in.

The rapid fire competition was next and Connor Ingram from the Milwaukee Admirals reigned supreme with only one goal against but Petersen shined with only two goals against. For his part, Frk scored one time.

Frk really stole the show in the next event—the hardest shot. He just so happened to be slated to be last in the lineup and he really Frkin’ delivered a scene worthy of Hollywood. But first: a quick backstory.

Most everyone had decent shots, some registering around 98-99 MPH. Evan Bouchard looked like he was going to be a tough one to beat with 101 MPH slapshot but Frk’s teammates knew he could easily beat that. And beat that he did. His first attempt clocked in at 104 MPH, which is pretty good. He got another chance to see if he could up that and did he ever.

Your #AHLAllStar Hardest Shot Winner, at 109.2, is Martin Frk!!!! pic.twitter.com/CrVtA9D3dj

There was the briefest of moments of stunned silence before the crowd completely erupted as the results of Frk’s second attempt flashed on the screen. Ontario might not be anywhere near Hollywood or even Los Angeles (it’s about 45 miles east of Staples Center), but it was still an award worthy performance.

Neither Reign skater participated in the fifth event, which was the accuracy shooting (think: exploding targets).

Outside of the hardest shot, the 3-on-0 (“pass and score”) competition may have been the most fun to watch. The rules are pretty simple: all three skaters much touch the puck at least once and the goalie tries to stop each shot attempt. Petersen stopped two of three attempts while Clague’s team scored twice.

The final event of the evening was the breakaway challenge, which is pretty self explanatory (and fairly similar to the NHL version). Clague’s shot was saved, Petersen stopped four of five, and Frk nearly potted a goal but couldn’t beat the iron.

Frk fakes a slapshot but hits the post in the Breakaway Relay#AHLAllStar #LAKings #Reign pic.twitter.com/kfV2CL4wWn

All in all, it was a very fun evening capped off by an incredible moment captured in history. The AHL All-Star Classic continues Monday with the 3-on-3 tournament beginning at 7 p.m. PST and will be streamed on NHL Network and TSN and will be streaming for free on AHL TV.